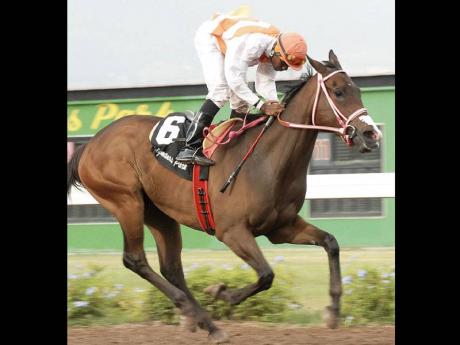 The two-year-old season kicks off at Caymanas Park today with the Eddie Black Memorial Cup over 600 metres straight taking the spotlight.

The Eddie Black Memorial has attracted six starters, all fillies, and indications are it will come down to the trio of LEANNE, MUSICAL DIRECTOR and the American-bred LITTLE MAMA MIA.

LEANNE, who is part-owned by the trainer, looks the more forward of the two and with Cardenas offered this ride, the hint should be taken.

The bay filly by Western Classic out of Jamaican Dream looked forward in condition when clocking 36.1 over three furlongs alongside LADY ABHIJITA on May 19 and should make a brave bid first time of asking. LADY ABHIJITA is a bay filly by the 2005/2006 'Horse of the Year' Miracle Man out of Lady Bakul.

The Lorenzo Robinson-owned, -trained and -bred MUSICAL DIRECTOR, a bay filly by Film Director out of Twentyfour Seven, galloped three furlongs from the gate in 36.0 on May 22 and should go well.

Still, the most forward of them all is LITTLE MAMA MIA, a bay filly by Unbridled Fantasy out of Unbridled Song to be ridden by back-to-form Richie Mitchell for trainer Morris Powell.

LITTLE MAMA MIA caught the eye at exercise on Saturday, May 19, galloping three furlongs from the gate in 35.3, looking fit and well. She obviously has good speed and should use this to best advantage and make all in mid-track.

Leading lights in the Birnamwood Trophy are COBRA, RUN CHARM RUN, ELOPING EMMA, MUCHO GUSTO, GOLDEN OPPORTUNITY, ZARA and the speedy LOVETTA JONES, who will have to be caught from the convenient mark of 52.0kg with Cardenas up.

I also like KING SOLOMON in the fourth race, PRIESTKING (fifth race) under leading all-time jockey Winston Griffiths, fresh from a three-day suspension, CLASSICAL PLEASURE in the seventh and ELECTRIFYING to rebound in the eighth.