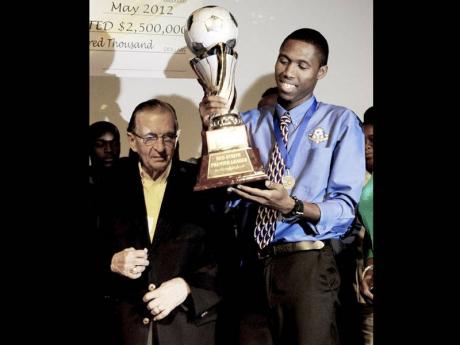 President of the Jamaica Football Federation (JFF), Captain Horace Burrell, has issued a call to Prime Minister Portia Simpson Miller to consider the building of at least four mini stadiums as part of the government's Jamaica Emergency Employment Programme (JEEP).

"I am appealing to the prime minister and sports minister, via minister without portfolio in the ministry of sports, Natalie Neita-Headley, who is in attendance, for the incorporation of the building of at least four mini-stadiums in the JEEP Programme," said Burrell.

"It would put people to work!" he added.

Burrell, who also touched on other issues affecting the growth and development of the sport locally, said the positives of building the stadiums would far outweigh the negatives, and would be a worthwhile investment.

"We could build some 10,000-seat venues that are similar to the ones in Trinidad and Tobago which have, over the years, allowed that country to host major regional and international tournaments," he said.

"It would be money well spent."

Burrell was in a similar strident manner when it came to the matter of playing surfaces in the country, saying this was limiting the full development of players.

"Many persons have been talking that Jamaica players lack finesse in passing, but one of the primary reasons for this is the poor surfaces that most of these youngsters are playing on," he said.

"This is something that we need to address as a country, and I call on the powers that be to help out."

He also walked away with the Tony Burrowes player personality award for outstanding leadership on and off the field.

Coach of the year

Portmore captain Adrian Reid, meanwhile, was all smiles when he and his teammates were presented with their championship medals and the league trophy from PLCA chairman, Edward Seaga, and Red Stripe brand manager, Erin Mitchell.

Also in attendance were Opposition Leader Andrew Holness and members of the Reggae Boyz team, who are preparing for their second-leg friendly international tie with Panama on Friday in Panama City.