James, Wade too hot for Celtics 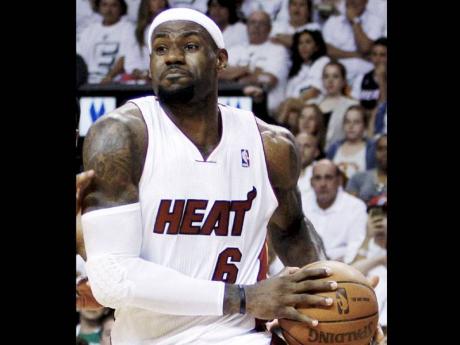 Dwyane Wade grabbed a rebound, turned and fired a 90-foot pass to LeBron James to set up one of the easiest scores the Miami Heat had all night.

Yes, James and Wade are clicking - at the perfect time.

James scored 32 points and grabbed 13 rebounds, Wade scored 10 of his 22 points in the fourth quarter and the Heat beat the Boston Celtics 93-79 on Monday night in Game 1 of the Eastern Conference finals. The stars were stars, and the role players more than did their parts as well, with the Heat enjoying a 48-33 edge in rebounds, blocking 11 shots and never trailing.

"One down. And they still have an opportunity in Game 2 to accomplish what they want to," Heat coach Erik Spoelstra said, referring to how Boston can still grab home-court advantage by winning Game 2. "At times it was a strange game. Some good runs, both teams. We felt we could have played better and I'm sure they felt the same thing."

Shane Battier had 10 points and 10 rebounds for the Heat, who wasted an early 11-point first-half lead, then gave up 35 second-quarter points before running away to break a half-time tie - getting going with a 9-2 run early in the third, that Wade-to-James touchdown pass part of the flurry.

"We didn't play our best game," James said. "And we want to just try to continue to get better throughout the series."

Kevin Garnett had 23 points and 10 rebounds for Boston, which got 16 points, nine rebounds and seven assists from Rajon Rondo and 12 points from Paul Pierce. Ray Allen shot just 1 for 7 from the floor for Boston, which was outscored by 10 in the first quarter and 11 in the third.

"On the road, you can't have two quarters of lulls," Celtics coach Doc Rivers said.

Game 2 is tonight in Miami.

And while both sides would say there's a long way to go in this series, Game 1 winners have a decided edge in any best-of-seven series, the conference final being no exception. In the 10 most recent postseasons, teams with 1-0 leads in conference finals have advanced 15 out of 20 times.

"They're home, they're comfortable and when you're comfortable you do things like that," Garnett said, suggesting Miami were showboating at times down the stretch.