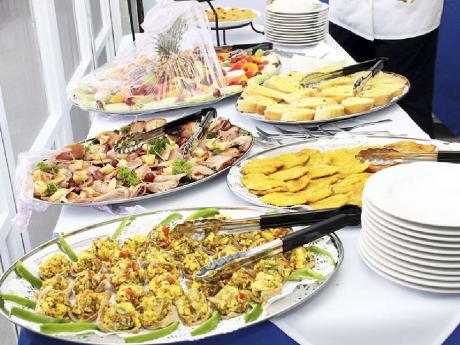 A sampling of hors d'oeuvres prepared by the Food Services Centre. - Contributed photo

An organisation focused on employee development, the National Commercial Bank (NCB) has implemented several initiatives which foster the well-being of its employees. The most recent is the establishment of a world-class Food Services Centre which caters to the dietary needs of over 900 employees in the Corporate Area.

NCB's centralised food-preparation services found its genesis in 2004 at the King Street location. Meals are subsidised and provided to employees at a lowered cost. The service, however, needed more structure and organisation. It is against this background that NCB invested $46.3 million in the development of a world-class facility, housed in Cross Roads, on 7,000sq ft, with the capability to centralise all its food-preparation services.

The centre, which is one of the best in the island, not only accommodates the preparation and storage of food items, but also houses a sick bay and lunch room. Structured for supplying employees within the Corporate Area, the centre facilitates an increase in the number of meals prepared daily and has resulted in the enhancement and standardisation of meals while reducing costs for the production and delivery of lunches to employees.

The physical structure, however, was not the only aspect of development. In preparation for the upgrade of the Food Services Centre, staff members in this unit were certified by the HEART/Trust NTA in the areas of food services and safety, in keeping with regulatory standards.

Rickert Allen, NCB's senior general manager, group human resources, states: "The undertaking of this project not only added value to the organisation by virtue of acquiring a facility wherein we are able to centralise our food services in the Corporate Area. It also added value to our employees who work assiduously in this particular unit, as they were able to improve their learning and benefited from a greatly improved working environment, in order for them to consistently maintain high standards in their work output."