'Shades of Light' makes use of wonderful blend 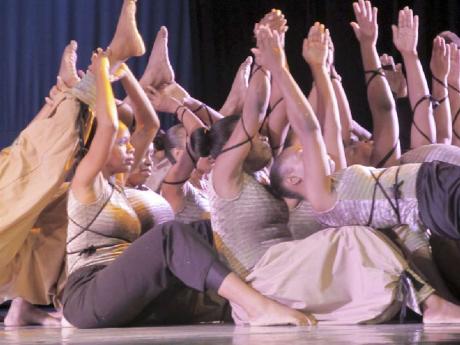 Dancers perform a Denise Gibbs-choreographed piece called 'In the Body' at the Little Theatre recently. - Photos by Marcia Rowe 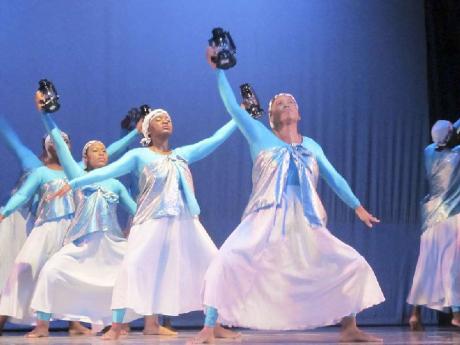 Take 19 years of experience, blend it into a group of choreographers and dancers who are passionate about their beliefs and the result is Shades of Life, Perspective is Everything. This was the title of Praise Academy of Dance's 2012 season held at the Little Theatre recently.

The group is known for its creativity and strong religious messages in their works. Shades of Light allowed the company to live up to those expectations.

Comprised of 15 dances performed by the academy senior department, the relatively smooth programme satisfied the soul.

The dances, in some cases, were captivating. They were presented with good use of space and props, well-designed costumes enhanced by appropriate lights, making the works of the many choreographers more memorable.

Nicole Bain's Tapestry was the curtain-raiser, and while it was good, it was clear from the vocal reaction of the audience that the dance to have best captured the imagination was the Omoro Griffiths' choreographed Break Free.

Break Free was entrusted to six male dancers. With some well-defined street dance movements, the item was exciting. This was made more so with turns, pyramids and lovely body control, all done to the uptempo beat of DJ Nicholas and Sista Sasha's song, Fimi Jesus.

The dancers' red and black vest along with black pants completed the package nicely.

But, before the excitement of Break Free, there was Fortified, one of the most creative dances of the evening.

The Ani Williams dance drama showed choreography of some basic movements, which represented persons just getting out of bed.

The simple actions of stretching, yawning and rolling were nicely executed by the large group of female dancers.

Break Free was also strong on message and was complemented by the choreographer's music selection.

The free-flowing, night-gown-looking costumes aided by pillows as props added to the choreography.

Also worthy of mention was the dance Fix Me, choreographed by Kenesha Delatiebudair.

Its dramatic entrance and the movement of a tapestry of tangled bodies of dancers spoke volumes.

Part one of the two-segment show concluded with the lively Sophia Mckain-choreographed Wheat and Tears.

Part two began with one of three Robertha Daley-choreographed works, titled Safe in God. It was followed by Love's Song, one of the two three-motif dances. The other one was Heaven Suit, choreographed by the duo Freddy Moore and Annelise Christie.

While all the other dances were choreographed and performed to pre-recorded music, Nicole Bain's Love's Song was composed to live music.

Divided into three, each motif was danced by a different couple. The first motif, Song of Bliss, was passionately performed by Omorro Griffiths and Denise Gibbs.

Jamaica's 50th anniversary was acknowledged in Song of Celebration, performed by George Cameron and the company's artistic director, Pat Noble.

Patrick Earle and Kathryn Fletcher completed the love story with Song of Resolve.

Subsequently, the programme of praise dances flowed on steadily with Denise Gibbs' choreography, In the Body, Daley's Watch and Pray and Sophia Campbell's Provider.

Additionally, the works of Patrick Earle and Marcia Bailey were also performed. And when the curtain of the 19th Praise Academy of Dance season finally came down, it was at the end of a fantastic finale.