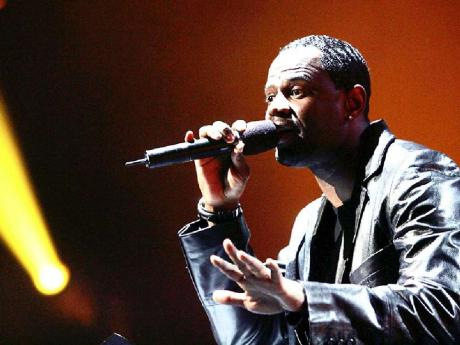 Backstage, McKnight was asked if he had a message for his Jamaican fans.

"I haven't performed in Jamaica for some time and I am looking forward to June 10. Tell my fans that I have a special show for this event and I will be pulling out all the stops and singing all my hits," said the R&B star.

McKnight is the featured artiste for CFW on the Sunday of the event. Pulse Chairman Kingsley Cooper was McKnight's guest at the BB King performance and joined the singer backstage to discuss his Jamaica set.

Two days prior, the New York Daily News welcomed McKnight (who lives in Los Angeles) to New York in a feature article that looked at his jazz roots and a planned performance with the Duke Ellington Orchestra.

Considered to be a musical genius by his peers, the singer-songwriter, arranger, producer, and musician is an instrumentalist who plays the piano, guitar, bass guitar, drums, percussion, trombone, tuba, flugelhorn and trumpet.

McKnight joins a star-studded musical line-up for CFW, which includes Grammy-winning British singer Estelle, popular for her international mega hit, American Boy. CFW is not only about fashion.

The signing of these major stars continues a CFW trend started a few years ago with the performances of Kelly Rowland and Eve, which was followed in later years by such stars as Johnny Gill and Joe.

However, while the earlier performances were cameos, current CFW appearances are full-length concerts.

CFW will be held at the National Indoor Sports Centre, June 7-11, and will feature the Caribbean's best designers, as well as acclaimed international stylists and emerging talent from inside and outside the region.

Supermodels, including Pulse stars, will show collections from these designers, styled by the event's New York style team, headed by Brandon Attherley.

Brian McKnight is perhaps most recognised for his strong falsetto range, and is widely regarded as one of the best talents in the adult urban contemporary R&B genre. McKnight's work has earned him a staggering 16 Grammy nominations.

McKnight was born in Buffalo, New York. By the age of 19, he had signed his first recording deal with Mercury Records. In 1992, Brian McKnight was released, and his self-titled debut peaked at 58 on the Billboard 200 chart, which primarily featured the ballad (and top 20 single) One Last Cry. Anytime, McKnight's final album with Mercury, sold more than two million copies and was nominated for a Grammy. The video for Anytime was nominated for Best Male Video at the 1998 MTV Video Music Awards.

In 1999, McKnight released Back at One his most successful album, which sold over 3 million copies.

In October 2007, McKnight made his Broadway debut in the show Chicago. From 2006 to 2010 he hosted a radio show, 'The Brian McKnight Morning Show' with Pat Prescott on KTWV The Wave in Los Angeles.

McKnight also has the uncanny ability to mimic the timbre and style of other singers such as Nat King Cole, Stevie Wonder, Marvin Gaye, and Prince.