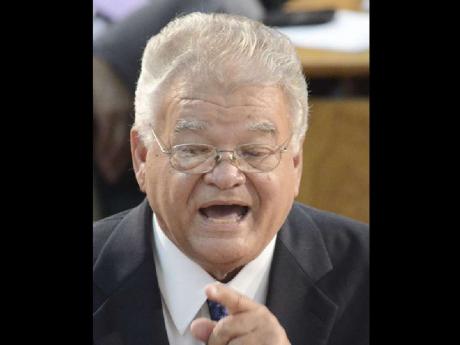 A STRIDENT Karl Samuda yesterday declared that Jamaica should make it clear to Trinidad and Tobago that it refuses to be a receptacle for its goods.

"Enough is enough. They must be made to understand that we are not their breadbasket. They are not here to reap the benefits and give nothing back to the country which supports it with the size of market that they need to survive," Samuda said.

The North Central St Andrew member of parliament, who served as the country's industry and commerce minister between 2007 and 2011, was making his contribution to the 2012-2013 Budget Debate in the House of Representatives.

Samuda said Jamaica has not been benefiting from its membership in CARICOM and suggested that the country leave the bloc of Caribbean member states.

Yesterday, Samuda stopped short of accusing Trinidad and Tobago of cherry-picking member states to which it sells natural gas. He pointed to a recent article in the Trinidad Guardian which stated that the twin-island republic has entered into an arrangement to supply Barbados with the fuel.

The
article states that under the arrangement, a 300-kilometre long pipeline
would run from the Cove Point Estate in Tobago to Barbados, and would
supply 30 million standard cubic feet of natural gas per day to the
primary customer, Barbados Light and Power
Company.

The deal is expected to result in a
significant lowering of energy prices for Barbados. The average cost of
electricity in Barbados is approximately US 25 cents per kilowatt-hour
(kWh), four times as much as Trinidad's (US six cents per kWh).
Jamaica's energy cost is US 32 cents per kWh.

Last
month, Jamaica's Energy Minister Phillip Paulwell told The
Gleaner that the Government was "trying to see if there can be
an agreement at this stage in relation to the supply of
LNG".

The advance by
the Government in April was the third time since 2004 that Jamaica was
seeking to purchase LNG from Trinidad and
Tobago.

Jamaica and Trinidad and Tobago signed a
memorandum of understanding in November 2004 for the supply of 1.1
million tonnes of LNG per annum over a 20-year period for use by
bauxite-alumina companies and the Jamaica Public Service Company power
plants.

Despite the agreement, then Trinidad and
Tobago prime minister, Patrick Manning, said his government would not
renege on the agreement to supply Jamaica with LNG, but the arrangements
never materialised as Trinidad said it did not have enough to
supply.

"You better wake up and smell the roses and
stop negotiating in those highfalutin air-conditioned boardrooms and
start to protect the interest of Jamaica," Samuda told Industry and
Commerce Minister Anthony Hylton.

"Jamaica (should) at one time stand up to
Trinidad and say 'enough is enough!'"

Samuda also wants a bipartisan review panel to
review the Treaty of Chaguaramas as it relates to energy and
trade.

"The question of the fact that they have been
lucky to have endowment of oil does not remove their obligation as a
member state to share that wealth," Samuda
said.

Adamant that Jamaica does not appear to be
benefiting from CARICOM, Samuda said "the time is running out on us to
make that decision."

Last night, Hylton told
The Gleaner that Jamaica continues to have dialogue
with its CARICOM partners to find a solution to the
problems.

He said the country has made it "very clear
that the way in which CARICOM is being implemented is to Jamaica's
disadvantage."

"We have demonstrated resolve that this
has to be resolved," the minister
said.