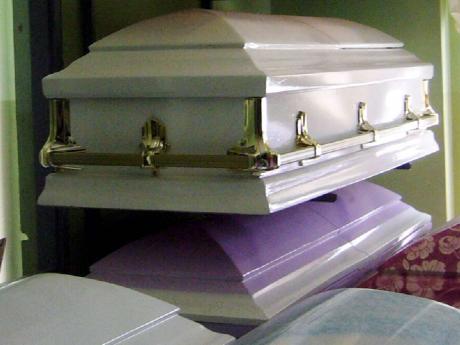 They say the only two certainties in life are death and taxes and, based on the revenue measures proposed for the 2012-2013 Budget, the two are becoming more closely intertwined.

Owners and directors of funeral homes are certain that tax measures announced by Finance Minister Dr Peter Phillips will cause them to raise the cost of their services. In 2009, then Finance Minister Audley Shaw announced that people paying for undertaking services would also have to pay general consumption tax (GCT) on burial, cremation and items such as coffins.

This year's tax measures will see a hike of 50 per cent on licensing fees and certificates of fitness on vehicles and a hike in the price of the carrier's licence.

Although the connection might not be immediately recognisable, Gordon Chuck, managing director of Sam Isaacs and Son Ltd, said the increases would have an effect on his company's prices.

"A large portion of our services has to do with vehicles. And most of the vehicles used are of a high CC rating ... attracting more charges," he noted. The imposition of a special consumption tax on ethanol will result in an increase in the price of petrol.

Winston Roman of Roman's Funeral Home said that it is already difficult to keep his 15 vehicle-fleet on the road due to the already burdensome gas prices and bad roads.

"I am thinking now about probably getting SUVs for the bad roads, like in the rural areas. But those vehicles require more gas," he said.

Adeline Davis, who works at a funeral home in St Catherine, added her voice.

Roman expected the cost of lumber (used to make coffins) to go up as well because they involve transport.

"Once transport costs go up, these costs have to be passed on to the customer," he noted.

They also felt the increase in GCT for commercial electricity users would affect the cost of cremation, as electricity and propane are used in operating the crematorium. Chuck said the fluctuation in the price of propane has meant an increase in cremation services almost weekly.

"Even if one price (propane) goes down, the other (electricity) will go up. And you need both to operate the crematorium," said Joseph Cornwall of House of Tranquillity Funeral Home.

Roman opined that the one per cent GCT reduction does not balance out the six per cent additional electricity cost.

"It's more beneficial for the Government because they are deriving more revenue," he said.

Davis lamented that even before taxes were introduced, some people were finding it difficult to bury their dead.

"It depended on the size of the funeral, but people were more comfortable, so we don't know how it's going to go," she said.

The operators felt the taxes directly influence operational costs and thus would affect business people across the board.

Davis said any cost increase for now would probably be a little over the regular prices, but a basic funeral costs approximately $250,000 (GCT included). She calculated this factoring in the cost of plots and other items like programmes and bookmarks.

Chuck assured customers that his company would try to delay and minimise whatever increases might be necessary.

"We try our best to absorb as much cost as possible. So I don't see an immediate increase," he said.

Roman and Cornwall felt it was too early to tell how big the increases would be. Roman was especially disappointed that he was hearing much about taxes, but not enough about making the economy more attractive.

"There is no implementation of incentives or stimulus. You can't balance one without the other."