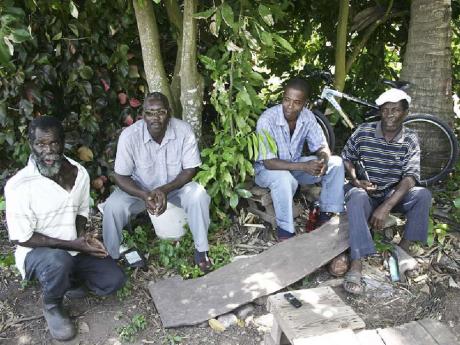 Johnny Brown (left), president of the Bodles Farmers' Association, speaks about the plight facing its members during an emergency meeting on Tuesday, as fellow farmers listen. - Photo by Christopher Serju

A GROUP of St Catherine farmers say although they have been charged to expand agricultural production in keeping with the national drive to grow the economy, their efforts are being stymied by lack of infrastructural support, and competition from imported food items.

The farmers describe the successive government agricultural policies, which they contend is jeopardising their livelihood, as contradictory and impractical.

At an emergency meeting held on Tuesday to discuss their plight, members of the Bodles Farmers' Association pointed to the pending increase in poultry meat price, which the producers have justified on the grounds of increased production costs.

They charge, however, that despite significant increases in the costs of farming inputs - fertiliser, pesticides, etc. - as well as labour over the last four to six years, they do not enjoy the option of passing on these charges to the consumers.

No safeguard for losses

According to one farmer, his is a prime example of how the deck is stacked against them. He noted that as the price of corn, the major ingredient in animal feed, rises on the international market, poultry and pig farmers are able to recoup their losses by increased prices. However, even though fertiliser prices have been moving up steadily over the last 10 years, farmers are forced to undersell their perishable produce, especially in times of glut, with no regard or safeguard for their operating losses.

"So those people are surviving, but we the little mini farmers down yah a suffer, and we can't reach nowhere. If we work until we reach Methuselah's age, we will never move, so things like this can't work," he told AgroGleaner.

The farmers, who are registered members of the Jamaica Agricultural Society (JAS) and Rural Agricultural Development Authority (RADA), say while in the past they have enjoyed some support from the JAS, the latter has been a failure with the promised technical advice and much-touted tractor rental service, which they say is almost non-existent.

One farmer lamented that over the years they have been fed a steady diet of promises by both organisations: "Them tell us things inna the pipeline. Month after month, we have meetings with them. Even three weeks ago, one of the RADA men was here and we not getting anywhere. So we have meeting with them over and over and we place our grouse, time and again, but we not getting any headway."

The farmers also noted that in recent years they have been plagued by high incidents of 'bad' seeds for which RADA has not been able to offer any explanation or help.

One explained: "The same tomato that we used to buy five, six years ago - M16, Roma and so on, they were without Jheri curl, (disease caused by yellow leaf curl virus) and nowadays, if you buy these same seeds Jheri curl would kill us. You cannot get rid of it and there is no doubt in minds that these people have done something to these seeds."

In 2010, the Bodles Research Station unveiled two hybrid disease-resistant varieties of tomato, Summer Star and Striker, which were developed in collaboration with St Jago Farm Supplies, but the farmers argue that they are not likely to recoup the higher price paid for these varieties. They told AgroGleaner this is not always economically feasible, since when the cheaper disease-free 'local' tomatoes produced by farmers in other parishes hit the market consumers are not likely to pay a higher price for the hybrid, which was produced at a higher cost.

"You can't go tell them this is a hybrid. To them it

Another issue for the Bodles Farmers' Association is what they view as the indiscriminate granting of import waivers, charging that merchants are manipulating the system to justify importation of crops which undermine the economic feasibility of their operations.

President Johnny Brown emphasised that the farmers are committed to farming, but must be given a fair and realistic chance at competing and providing for themselves and the country. He wants Government to restore the subsidy on farm supplies and inputs, including and especially fertiliser and pesticides.

"Our pockets are burning," he said.