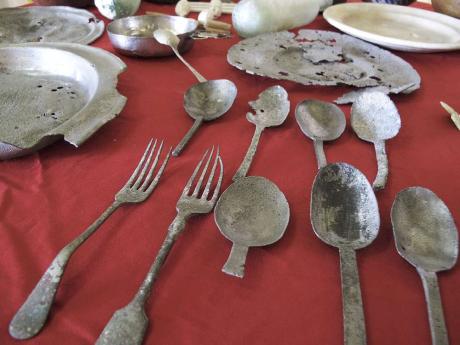 Silver forks, pewter cups, ceramic dishes, ornate smoking pipes and other artefacts collected by underwater archaeologists from the remains of the submerged Jamaican city of Port Royal, are shown to the media during a press conference in Port Royal, Jamaica on Tuesday. - AP

ARCHAEOLOGISTS SAID Tuesday that they will ask the United Nations' cultural agency to bestow world heritage status on Port Royal, the mostly submerged remains of a historic Jamaican port known as the 'wickedest city on Earth' more than three centuries ago.

Receiving the designation from UNESCO would place Port Royal in the company of global marvels such as Cambodia's Angkor temple complex and India's Taj Mahal.

The sunken 17th century city was once a bustling place where buccaneers, including Henry Morgan, docked in search of rum, women and boat repairs.

In recent days, international consultants have conducted painstaking surveys to mark the old city's land and sea boundaries to apply for the world heritage designation by June 2014, said Dorrick Gray, a technical director with the Jamaican National Heritage Trust, the government agency responsible for preserving and developing the island's cultural spots.

Port Royal was the main city of the British colony of Jamaica in the 17th century until an earthquake and tsunami submerged two-thirds of the settlement in 1692. It boasted a well-to-do population of roughly 7,000 at the time, and was comparable to Boston during the same period.

After the quake, the remainder of the town served as a British Royal Navy base for two centuries, even as it was periodically ravaged by fires and hurricanes.

In his sprawling book Caribbean, American author James Michener described Port Royal as having "no restraints of any kind, and the soldiers stationed in the fort seemed as undisciplined as the pirates who roared ashore to take over the place night after night. They were of all breeds, all with nefarious occupations."

Now, it's a depressed fishing village at the tip of a spit of land near Kingston's airport. It has little to attract visitors except some restaurants offering seafood and a few dilapidated historic buildings. The sunken, algae-covered remnants of the city are in murky waters in an archaeological preserve closed to divers without a permit.

But in recent decades, underwater excavations have turned up artefacts, including cannonballs, wine glasses, ornate pipes, pewter plates and ceramic plates dredged from the muck just offshore. The partial skeleton of a child was found in 1998.

At a Tuesday press conference, experts said it's among the top British archaeological sites in the Western Hemisphere and should be protected for future generations.

"There is outstanding potential here. Submerged towns like this just do not exist anywhere else in the Americas," said Robert Grenier, a Canadian underwater archaeologist who has worked closely with UNESCO. He believes the Jamaican site has a strong chance of getting on the world heritagelist.

Texas A&M University nautical archaeologist Donny Hamilton said the consulting team has completed the fieldwork for the world heritage assessment and is working on a management plan. He said Port Royal could become a sustainable attraction for tourists, but first "there's got to be something above the ground that people are going to want to come and see".

Jamaican officials and businessmen have announced various strategies to renovate the ramshackle town over the years, including plans for modern cruise liners and a Disney-style theme park featuring actors dressed as pirates.

Some area businessmen have grown exasperated with the slow pace of development.

"Somebody has to act with a certain measure of dispatch," said Marvin D. Goodman, an architect with offices in Kingston, across the bay from Port Royal.