Breachers of fisheries law will not be let off hook easily, says Clarke 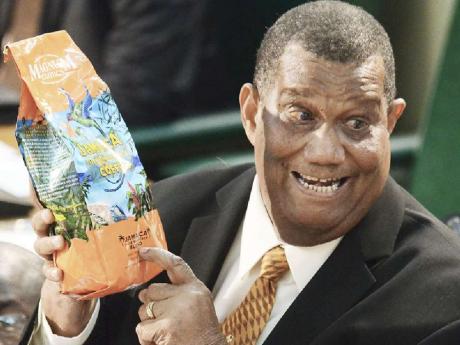 Roger Clarke, minister of agriculture and fisheries, shows a bag of foreign coffee using the Blue Mountain brand during his Budget Debate presentation in the House of Representatives yesterday. Clarke vowed to protect the brand through a comprehensive overhaul of the regulatory framework. - Rudolph Brown/Photographer

LEGISLATION IS coming to impose stiffer fines on persons who breach the Jamaican fisheries law.

Agriculture Minister Roger Clarke told his parliamentary colleagues yesterday that the Government would table in Parliament, this year, a new fisheries bill which would provide a comprehensive legal framework for the sustainable management of "our fisheries in keeping with international standards".

"A critical provision of this new bill is the significant increase in fines for breaches, as our own fishermen experience when they run afoul of the law in countries such as Colombia, Mexico and Honduras," Clarke stated yesterday during his 2012-2013 Budget Debate presentation.

Clarke's comments come against the background of what he described as the "over-exploitation" of Jamaica's most productive fishing ground, the Pedro Bank.

According to Clarke, the depletion of the country's fisheries resources was due largely to unsustainable fishing practices such as dynamiting, use of small diameter mesh sizes for traps and nets and spear fishing at nights.

The agriculture minister warned that there would be no let-up on enforcement activities as it relates to illegal fishing practices.

Roger Clarke, minister of agriculture and fisheries, shows a bag of foreign coffee using the Blue Mountain brand during his Budget Debate presentation in the House of Representatives yesterday. Clarke vowed to protect the brand through a comprehensive overhaul of the regulatory framework.

CABINET HAS approved the rationalisation of the regulatory aspects of the Coffee Industry Board, the Cocoa Industry Board, and the Export Division to be consolidated into one administrative facility.

In his presentation to the 2012-2013 Budget Debate in Parliament yesterday, Agriculture and Fisheries Minister Roger Clarke said Cabinet would be presented with concrete proposals in relation to the organisational structure of the consolidated entity before the end of the financial year.

Clarke said proposals for redundancies and legislative amendments to the three existing laws to recognise the new entity would also be submitted to Cabinet.

"Having rationalised the regulatory functions of these three entities, in parallel, we will package all their commercial assets with a view to divestment," Clarke announced.

It is proposed that the proceeds from the divestment of these assets will be used to promote the development of cocoa and coffee along the value chain.