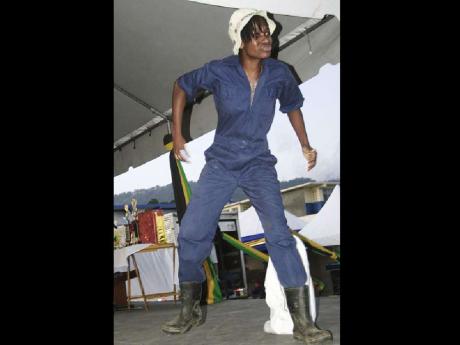 Favourite Amelia Leveridge, 2012 Kingston and St Andrew Farm Queen performs her winning talent piece, which the audience greatly enjoyed. She beat four other contestants from the Corporate Area for the right to participate in the National Farm Queen Competition to be held at Denbigh from August 4-6.- Photo by Christopher Serju 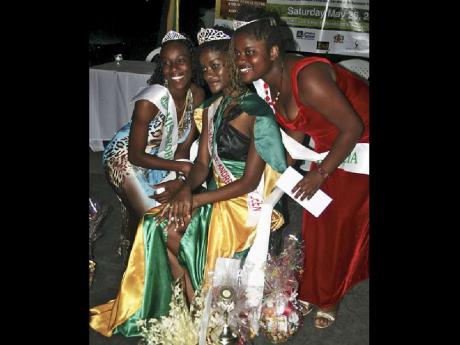 "Me bwile up, man" could very well become the next catchphrase in the agriculture sector. This follows the strong audience response to 2012 Kingston and St Andrew Farm Queen Amelia Leveridge's talent presentation during Saturday's contest to select the Corporate Area's representative for the national farm queen competition at the annual Denbigh Agricultural, Industrial and Food Show set for August 4-6.

In a riveting performance at AgroFest, an annual show hosted by the Kingston and St Andrew branch societies of the Jamaica Agricultural Society (JAS) on the Jamaica College grounds, the 19-year-old lamented the losses she had suffered at the hands of thieves. Each time she cited an example of how the criminals had shattered another dream and the financial loss encountered, the audience roared in laughter, especially after she recounted that they had even stolen the "moo" from her cows and the "maa" from the goats.

With each incident, "Me bwile up, man" the College of Agriculture and Science and Education (CASE) final-year student said, meaning she would get so upset it made her blood boil. By the second verse, the audience was really getting into the performance and, thereafter, would anticipate and drown out her voice each time she "Bwile up, man".

However, as she later told AgroGleaner, while the piece penned by close friend Aubrey Pinnock proved very popular with the audience and judges, earning her the sectional prize of Best Oral Presentation, praedial larceny is no laughing matter and the presentation was, sadly, a reflection of her reality.

She admitted: "I wanted them to feel my pain and understand my pain because I'm sure persons here or most persons here are farmers themselves. I have been affected on numerous occasions at the CASE and at home as a coffee and banana farmer. So I chose praedial larceny because it's a message everyone needs to hear and understand, that we are being affected by praedial larceny and it is becoming a serious problem."

So committed is the Middleton JAS branch representative to getting this message across that she chose the topic for her written technical paper presentation, copping the sectional prize in the process, as well.

"We were given 10 choices to select a topic and I chose praedial larceny," she explained.

The pencil-thin teenager, who stands 5' 11" and hails from Middleton in Irish Town, beat four other contestants, winning $20,000 cash from the JAS, a weekend for two at a top-class resort, as well as a number of gift packages.