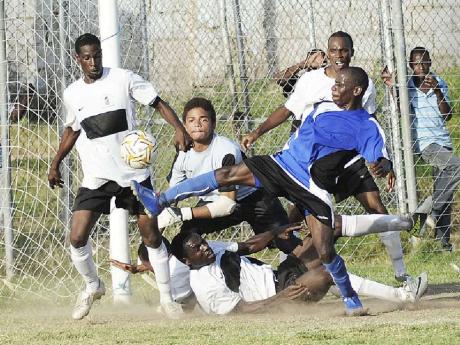 Volvo's Everton Marsh (foreground) tries unsuccessfully to get the ball into the back of the net during his team's 2012 Jamaica Football Federation Confederation play-off match against Cavalier yesterday at Collie Smith Drive. Cavalier's captain Michael Stone (left) and his teammates assist goalkeeper David Mitchell (centre) to thwart the danger. The game ended 1-1. - Ian Allen/Photographer

Volvo, who topped the Eastern Confederation, took the lead through Dale Wallace in the ninth minute, while Cavalier pulled level courtesy of a strike from Richard Williams in the 41st minute.

In the round's other game, Savannah defeated South Central team New Green 3-1. Savannah's goals were scored by Omar Stewart (23rd), Rohan Young (34th) and Jessie Mayler (87th); while Manchester-based New Green got their goal by way of a 63rd-minute strike by Kashwayne Miller.

For the second consecutive game, New Green ended with 10 players, following the dismissal of Trasain Walcott in the 90+2 minute.

In spite of playing away from home, Volvo seized the early ascendancy and deservedly took the lead in the ninth minute when Wallace got off what appeared to be a cross from the left flank. The ball, however, eluded Cavalier's custodian David Mitchell and lodged in the corner of the net, as he had over-compromised for the cross.

In a game which deteriorated in quality as it progressed, Cavalier evened out possession and appeared to have taken the lead in the 29th minute when Nigel Reid headed in. But assistant referee Oyinco McTaggart flagged for offside, much to the bewilderment of most.

Cavalier were not to denied and found the equaliser four minutes before the half-time interval, when Norman Bailey sliced through Volvo's defence before rolling the ball home.

It was the turn of the Volvo contingent to express disappointment in the 89th minute, as Christopher Green's header, which hit the underside of the crossbar, was deemed not to have crossed the goal line.