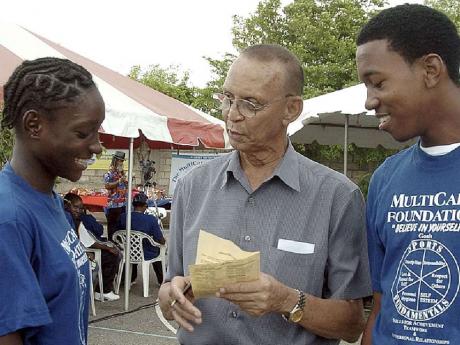 Later today, some of Jamaica's best athletes will take some important steps on the road from Daegu to London. They'll compete in Rome, the third stop on the IAAF's Diamond League, in a stadium that bore witness to the 1960 Olympic Games, where Keith Gardner had his finest hour in track and field.

In the same stadium where our athletes will seek Diamond League dollars and top form, Gardner finished a close fifth in the 110-metre hurdles.

Long before Lycra and synthetic tracks, Gardner earned his place among the best sprint hurdlers on the planet. He'd been the big star of the 1958 British Empire Games. He defended his 120-yard hurdles title - first won in 1954 - as expected, but also took gold in the 100 yards and silver in the 220 yards.

In fact, he was so far ahead of his time that no other Jamaican actually reached the Olympic final until Maurice Wignall placed fourth in Athens in 2004.

In the last race of his Olympic career, Gardner ran a 45.7-second relay leg for the British West Indies 4x400 team. His efforts and those of Jim Wedderburn, Mal Spence and George Kerr garnered a bronze medal.

On his way to Olympic glory, Keith Gardner had earned top-10 world rankings in all his three events. After two-time Olympic finalist Wignall, he and Dwight Thomas probably have equal claims on the number-two spot among Jamaica's 110-metre hurdlers.

That will prompt a circular debate. Thomas has taken Wignall's national record down from 13.17 to 13.15 and had reached World Championship finals in both 2009 and 2011.

There can be, however, no dispute that Gardner is the most versatile Jamaican male athlete at the international level.

Harrison Dillard, the American who won the 1948 Olympic 100 and the 1952 110 hurdles, is the most successful male sprinter hurdler. Gail Devers, twice Olympic 100 winner and three-time World hurdles champion, is probably the best woman in this category.

As a hurdler-sprinter, Gardner wasn't far behind.

His death last week at 82 ended a life given to service. As an athlete, he was a fine competitor. Off the track, he coached and went on to serve youth through the MultiCare Foundation.

In Beijing, host city of the last Olympics, Herb McKenley was sorely missed. His time had come too soon for him to see Jamaica's finest Olympic performance.

It's the same with Gardner. Jamaica has never been better in his signature event. There's so much quality that, even though Wignall is inactive, this could be our best year ever in the high hurdles. Thomas has had a slow start to his season and needs to be at his best to keep World Student Games winner Hansle Parchment and 2010 NCAA champion Andrew Riley at bay.

Riley could be a special one. Like Gardner, he is versatile. At Calabar High School, he was a high jumper and heptathlete who occasionally ran the 4x100. At the University of Illinois, he has shown somewhat-surprising sprint speed.

Following his fine run of 13.19 seconds at the Jamaica Invitational, Parchment is knocking on the door of Thomas' national record. For many, he is a favourite for selection to the Olympic team.

It's a pity he won't around to see them excel in an event where he set the standard.