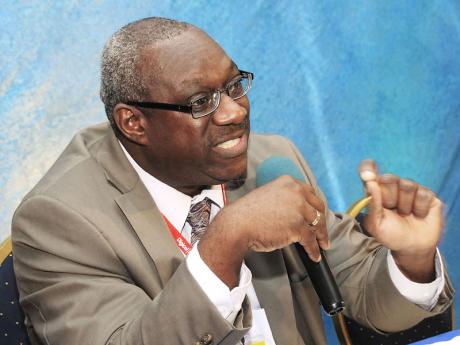 The Planning Institute of Jamaica (PIOJ) has reported that real gross domestic product (GDP) grew by an estimated of 0.6 per cent for the March quarter, notwithstanding the dramatic drop in mining and quarrying activity that ended a two-year growth streak.

The agency also projects that growth within the second quarter ending June will fall within a range of 0.5 per cent and 1.5 per cent.

PIOJ director general Dr Gladstone Hutchinson also pointed out that the Jamaican economy recorded growth for the fiscal year ending March 2012, its first fiscal year of expansion in four years, since the recession.

For the January to March quarter, PIOJ director general Dr Gladstone Hutchinson said that all but three sectors within the economy recorded growth.

The three underperforming sectors were: mining and quarrying; construction; and transport, storage and communication.

The mining sector, which declined by 5.5 per cent, halted seven consecutive quarters of growth, and resulted from a 8.4 per cent decline in total bauxite production.

Construction contracted 0.5 per cent due to sharp declines in road infrastructure programmes.

The main growth areas were agriculture, wholesale and retail trade and the tourism industry.

For the quarter, the services sector contributed growth of 0.2 per cent, while the goods-producing sector accounted for 1.4 per cent.

"The improved performance reflects the continued strengthening of the economy," said Hutchinson on Wednesday, at his quarterly briefing on the economy.

Within the goods-producing sector, agriculture grew by seven per cent reflecting a recovery in domestic crop production helped by favourable weather conditions.

To that end, total hectares of crop reaped during the quarter increased by 7.4 per cent.

The 0.4 per cent growth in manufacturing was fuelled by increases in the food, beverage and tobacco segment.

PIOJ also reported growth in remittance inflows, which grew by 5.5 per cent for the quarter, while activity in the hotels and restaurants segment increased by one per cent, backed by a 0.6 per cent increased in stopover tourists, a strong 69.4 per cent increase in cruise passenger visits.

For the quarter, provisional visitor expenditure was estimated at US$620.6 million, an increase of 4.6 per cent.

But despite the economy achieving growth, the labour market still exhibited signs of weaknesses, suggesting that the recovery is still too weak to sustain jobs.

The employed labour force contracted year-over-year with a net loss of 23,100 jobs, and a shrinking of the total labour force to 1,083,400.

The credible performance by the economy, Hutchinson said, was achieved against a background of quarterly inflation of 1.7 per cent, a fiscal deficit of J$24.3 billion and depreciation in the exchange rate.

PIOJ's short-term outlook for the economy remains positive for continued growth in agriculture, wholesale and retail trade as well as tourism, tempered by sharp rise in commodity prices and lower demand for Jamaica's goods and service given economic uncertainties in the Eurozone.