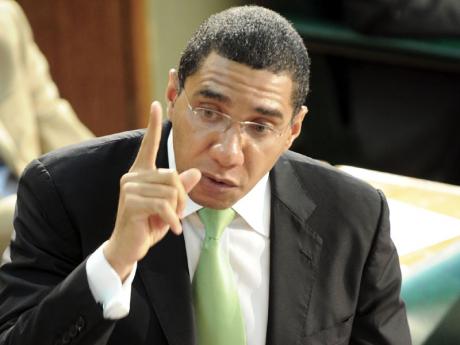 AN 'EMOTIONAL' Andrew Holness yesterday told Jamaicans that the "medicine" dispensed by Finance and Planning Minister Dr Peter Phillips last week was not the "bitter" prescription his then Jamaica Labour Party government had proposed last year.

Holness said the new measures were "poison" and had the effect of further impoverishing the poor, "killing businesses" and reducing growth in the economy.

Holness, in his first contribution to the Budget Debate as opposition leader, said Phillips went wide of the mark as he appeared to have confused tax reform with the tax measures announced.

"You have an opportunity to reform the tax system in Jamaica and you have turned the opportunity into a crisis," he charged.

In the run-up to the December 2011 general election, Holness had warned the country that his then administration would have very little option but to dispense bitter medicine in what appeared to have been efforts to rescue the stalled standby agreement with the International Monetary Fund.

The current administration is in talks with the fund as it seeks to negotiate a new three-year agreement.

Yesterday, Holness castigated Phillips who presented a $19.4-billion tax package, saying the tax measures had "very little to demonstrate that you are serious about tax reform".

He said the new measures did not have a strategic direction or intent.

In a presentation punctuated by crosstalk between the opposition leader and the government side, Holness said a JLP government would have opted to widen the tax base.

The opposition leader forecasted that based on the tax package, the Budget might have a gap of between $11 billion and $15.2 billion. "In my view, you will face a gap in the Budget soon."

He argued that revenue and grants underperformed by about $7.6 billion last year.

There were moments of sharp verbal exchange between Holness and Simpson Miller after the opposition leader said Jamaicans could accuse the prime minister of deception based on the tax measures imposed.

"Madam Prime Minister, you played to the fears and vulnerability of the poor and told them you could do better. The people believed you and gave you power ... . With this tax package, the people are slowly coming to the view that you have deceived them," Holness declared.

In a sotto voce comment, a seemingly agitated Simpson Miller charged: "You wreck the economy and put us in this position. I will deal with you on Tuesday. Rubbish!"

She was making reference to her Budget Debate presentation next Tuesday.