Fr Ramkissoon to Gov't: Do more for our kids 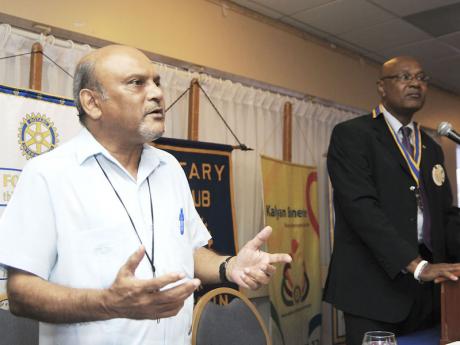 Father Gregory Ramkissoon (left), of the Mustard Seed Communities, speaks on early-childhood education during a Rotary Club of Kingston meeting held yesterday at The Jamaica Pegasus hotel in New Kingston, while acting president of the club, Noel Osbourne, looks on. -Gladstone Taylor/Photographer

Founder of the Mustard Seed Communities, the Very Reverend Monsignor Father Gregory Ramkissoon has lambasted the Government for not doing more for early-childhood education.

"Any increase in salaries or benefits to members of the Upper or Lower Houses of Parliament should be postponed for this fiscal year and the money given to the needs of the early-childhood institutions," Ramkissoon said to huge applause from members and guests of the Rotary Club of Kingston gathered for their weekly meeting at The Jamaica Pegasus hotel in New Kingston yesterday.

"Also, no money should be spent on new facilities or buildings for the Parliament until we are sure that we have covered all the bases for early-childhood education. So no new Gordon House!"

Noting that early-childhood education has been allocated $2.2 billion - a cut when inflation is added, Ramkissoon said what was required was $7.7 billion.

He calculated that there are between 170,000 and 180,000 children in the early-childhood sector which means roughly US$1.25 a day is needed for the year for each child. The present budget, by his figures, only gives US35 cents a day.

"On top of that, we are hearing of GCT (general consumption tax) on books ... not the ones that are rented by the schools but other books. So, the little money being given to some by PATH (Programme of Advancement Through Health and Education) will be rendered almost useless when the GCT is put on the books," he said.

Ramkissoon suggested that properly caring for the nation's children was "the final frontier of development" and said he felt Jamaica has been found wanting in terms of how it treats its citizens, especially children.

"In many ways, most of our institutions are failing. The children and schools are perhaps the last place we can go now to do something meaningful and potentially for development and growth," he said, adding that he felt the Government should help all non-governmental organisations that take care of children.

"At Mustard Seed, we have 78 kids abandoned with AIDS. I have to spend $1 million every month just for medicine," he revealed.

Ramkissoon reeled off a number of statistics pointing to the urgency required in providing proper assistance to the nation's children.

He noted that for a five-year period ending in 2010, there were 451 murders involving children, or roughly 90 children a year being murdered. Over an earlier five-year period, male children murdered 220 people and shot at 265 others, meaning children killed almost 50 people per year.

Citing figures from 1986 to 2002, provided by Professor Maureen Samms-Vaughn, he said for more than 65 per cent of our children there is no family structure, and only 25 per cent were in a household that has a mom and a dad. Using World Bank data, he showed how a well-educated population was a key factor in producing great national wealth.

"In Jamaica, for every US dollar spent on early-childhood programmes, the country gets a cumulative economic return of US$17. You can't do better than that, not even on the stock market."

Ramkissoon opined that a programme like the Gleaner-supported Crayons Count is a way forward, but more needed to be done by all concerned.

"We have to be much more proactive as a body of people who aspire to the spiritual life. We can be much more creative and focused when dealing with the needs of our children, especially the ones in early childhood," he pleaded.

Moved by his words, members of the club took a special offering to aid the Mustard Seed Communities' various projects.