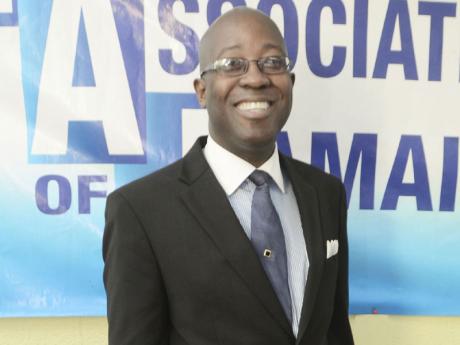 The new president of the Insurance Association of Jamaica, Hugh Reid.

There is a new captain at the helm of the Insurance Association of Jamaica (IAJ). He is Hugh Reid, a self- styled veteran of Jamaica's insurance, having spent some 28 years with the then Life of Jamaica (now Sagicor), Prime Life Insurance Company and now Scotia Life Insurance. He assumed the post on Wednesday.

Each head of the IAJ serves for two years and, already, Reid has mapped out his list of four major objectives for his tenure. He told The Gleaner they are:

1 Continue the advocacy for critical social and policy issues affecting the industry, for example the pension reform. "Important legislative changes are coming, but this is being worked on for too long now and I would love to see it fast-tracked in my two-year tenure.

He added that the Bank of Jamaica has imposed a limit of five per cent on foreign exchange assets on the sector that must get its permission to transact foreign- exchange business. That rule, which also applies to securities dealers, he said, places the insurance sector at a competitive disadvantage.

2 Improve communication with the IAJ's clients and the public. To achieve this, the hotline needs to be publicised, since that is the medium through which complaints are handled. He will also be ensuring that more use is made of the IAJ's recently revamped website.

3 Build on the IAJ's research capabilities so that the public can better use them.

4 Make the public aware of the College of Insurance and Professional Studies (CIPS). "I want it to be transformed into a world-class facility," Reid said.

The president of the IAJ is supported by two vice-presidents - one representing life, and the other representing the general industry - as it carries out its mandate to support the growth and development of the insurance industry by lobbying on issues that affect the sector. It also encourages ethical conduct among members and provides information for decision making, as well as avenues for addressing concerns.

The new IAJ executive board members