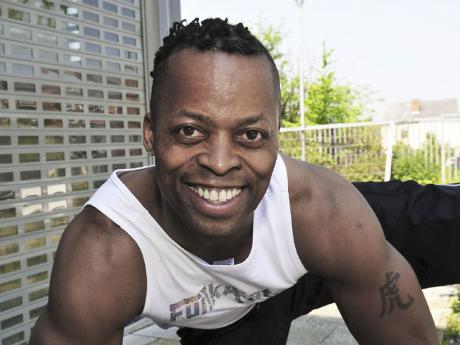 Leroy Henry ... his family is from Kingston. -Contributed

POCKET dynamo Leroy Henry is counting the days until he picks up his Olympic torch and runs into the history books as part of Birmingham's Olympic torch relay team.

It's a far cry from the day when the popular fitness trainer was shot in the thigh, the innocent victim of an armed robbery which put him in hospital for three weeks a decade ago.

But his remarkable fightback to fitness and his crusade to help others has earned the 46-year-old an official place among the torchbearers on Sunday, July 1.

In fact, when he posed for his photograph he could adopt virtually any position - an astonishing flexibility that he puts down to his own unique fitness regime that he has called Funkalates.

Henry, whose family hails from Kingston, Jamaica, has a busy schedule teaching Funkalates in at least seven gyms across Birmingham and beyond.

And his aim is to make it as much a household name in fitness circles as Pilates or Zumba, while also teaching the coaches all the moves so they, in turn, can pass on the fitness message.

His brand of fitness is unique as he has also created the music to get people working out with a smile on their faces. He has composed the music, while also acting as MC on the recordings, and describes the rhythmic beat as a mix of fusion and old raw with a bit of jazz and blues. He has already sent some tracks to the British Songwriters' Guild.

Music runs in his blood as his uncle, Barlo, is a Kingston-based record producer who is involved with well-known artistes such as Bounty Killer, Jah Cure and Horace Davis.

Henry first got into fitness as a teenager, training at Ladywood Amateur Boxing Club before a competition win led him to change direction and launch a dancing career which took him to Germany.

But now his sights are set on running in Birmingham on Sunday, July 1, playing his part in the great Olympic torch relay.

"I cannot believe I will be doing that in less than a month. It's a fantastic honour," said Henry, who was shot in a bungled robbery as he sat in a barber shop in Newtown 10 years ago.

"At the time, I never thought I would be fit again and I think the fightback I had makes me more understanding of clients as they struggle with their own fitness.

"Funkalates offers cardio, stability and balance as well as a terrific calorie burn," said Leroy, who also teaches all kinds of other exercise classes, including Zumba, Pilates and rollerblading

"Everyone is challenged in a fun way, discovering muscles they didn't know they had."

To find out more about Leroy's fitness classes visit: www.funkalates.com.