Mona in front at Prep Champs 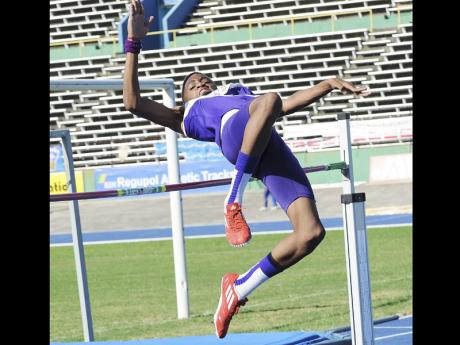 Mona Preparatory hold a slim lead over their rivals going into today's second day of the three-day JISA/CapriSun Prep Schools Track and Field Championships at the National Stadium.

After three finals, Mona lead the standings with 14.50 points, just ahead of Portmore Missionary with 13. They are followed by Our Lady of the Angels (11), Sts Peter and Paul (nine), Ardenne (eight), defending champions Hydel (seven), Vaz (five) and Quest (four).

One of the likely stars of the championships, Sts Peter and Paul's Chadon Davis, cleared 1.50 metres to win the Class One boys high jump ahead of Cardel West of Mona, who also had a best of 1.50m. However, Davis was declared the winner of the event after he achieved his mark on his first attempt while West cleared the mark on his final attempt. Tepheon Thompson of Our Lady of the Angels finished third with 1.45m.

The 12-year-old, who is aiming at three individual gold medals at the meet, has also advanced to the semi-finals of the 200m and 400m. He said he would be trying very hard to secure victory in both events.

"I hurt myself earlier in the day, but I am going to do my best to win both events," said Davis, who is an admirer of national 400m record holder Jermaine Gonzales.

In another final yesterday, Noellea Mason of Hydel won the girls' Class Two long jump with a leap of 4.57m. She finished ahead of Jamila Reid of Wolmer's (4.38m) and Kelsey Christian of Our Lady of the Angels (4.33m).