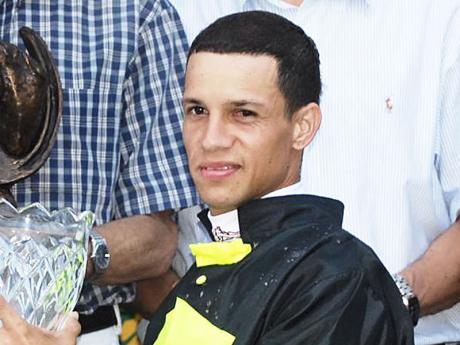 EVER BLESSED became the third 99-1 outsider to win at Caymanas Park this year, thanks to a bold front-running display in the second race for $180,000 claimers over 1400 metres.

Ridden by the sparingly used Leo 'Twitch' Miller for trainer Fitzgerald Richards, the five-year-old mare by Pat N Jac out of Knowledge had previously scored only once from 38 starts. But given a longer distance and significant change of equipment (tongue tie, figure eight off), reported a different animal for this race.

She turned for home with a commanding lead over 4-5 favourite LA'S DANCER and held him at bay by 11/2 lengths for a shock victory.

EVER BLESSED was not the only big upset on the card. In the fourth also over 1400 metres, RUBY D, offering odds of 47-1 with another seldom-used jockey, Douglas Badaloo aboard, ran on strongly to catch the poorly ridden 3-2 favourite KING SOLOMON within shades of the wire, winning by a neck.

Punters were not amused with the riding of Doushane Gordon aboard KING SOLOMON, as the jockey appeared to ease up in the closing stages and was caught napping by the Paul Smith-trained RUBY D.

The third upset came via the 24-1 outsider FIRST 'K' BOY in the eighth race over the straight-five course. The 4-y-o gelding from the stables of Gresford Smith was brought with a sustained run by jockey Richard Mairs to outfinish long-time leader and 7-5 favourite ELECTRIFYING under champion jockey Dick Cardenas in the last 100 metres.

Cardenas highlighted the 10-race programme with three winners, including the highly fancied LEANNE for trainer Richard Azan in the season's first 2-y-o race for the Eddie Black Memorial Cup over 600 metres straight.

The Panamanian jockey also won aboard 3-1 chance MAYBE I SAY SO in the sixth race over 1100 metres, and 3-5 favourite CLASSICAL PLEASURE, both for trainer Anthony Nunes, in the seventh over 1300 metres.

In the opening race, LEANNE (9-5) raced in contention as CC COLOUHOUN and 1-9 favourite LITTLE MAMA MIA disputed the lead, before coming through early in the last furlong to beat LITTLE MAMA MIA by 11/4 lengths in a field of six fillies. Purchased for $900,00 in last November TOBA yearling sale at Caymanas Park, LEANNE is a bay filly by Western Classic out of Jamaican Dream.

Gordon made amends for his earlier lapse with a good ride aboard the Norman Palmer-trained COBRA (3-1) in the closing race over 1300 metres for the Birnamwood Trophy contested by the maximum 16 starters.