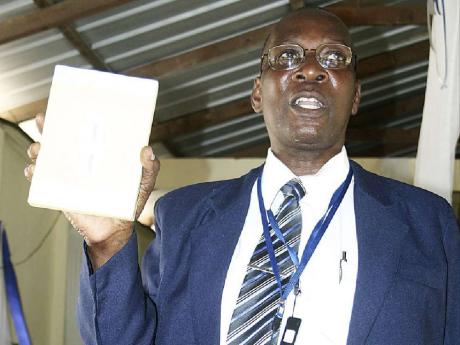 FARMERS IN Rock River, Clarendon, are breathing a huge sigh of relief knowing that many other eyes are now watching the sly praedial thieves in their community following the launch of Clarendon's first farmers' watch at Rock River's Bethlehem Baptist Church on Thursday.

The Clarendon farmers who make up the Rock River Farmers' Watch complained of frequent run-ins with praedial thieves, who are constantly robbing them of their livestock and agricultural produce, and pledged to bond together to stamp out the thievery by being the eyes and ears for their neighbours' farms.

"The thieves already steal mi six cows and 10 goats, and last Sunday them come back for the rest of the goats. It's a good thing wi see them, so we have to sit up all night to save the couple goats them left me with. So, mi glad for the farmers' watch because we a suffer, man," complained 71-year-old farmer Hermin Burrell.

The Rock River police, who were instrumental in setting up the Rock River Farmers' Watch, gave the organisation the thumbs up and pledged to work with the farmers to protect their livelihood.

"The very first day we set up the executive of the Rock River Farmers' Watch, it bore fruits; we managed to nab a praedial thief, who was harvesting one of the farmers' agricultural produce. So, the farmers' watch is an excellent community-based organisation to enhance community safety and security," boasted police corporal Junior Forbes to The Gleaner during Thursday's launch.

Jamaica's national praedial larceny prevention coordinator, Reginald Grant, who gave the keynote address at the event, explained how the farmers' watch is intended to work in protecting lives and property. Grant also warned farmers not to use the farmers' watch as a vigilante group, or attempt to arrest praedial thieves, but to call the local police to make the arrest instead.

"Like the neighbourhood watch programme, this subsidiary initiative called the farmers' watch is intended to promote the simple concept of beating praedial larceny and crime in general, through the partnership with the farmers and the police," explained Grant. At no time must the farmers' watch be used as a vigilante group or should farmers attempt to make arrests," added the national coordinator as he delivered the keynote address.

Grant used the launch to outline some of the benefits the new initiative could provide for farmers. These, he said, include a reduction in opportunities for theft, strengthening of community spirit, giving support to the detection of crimes, as well as the prevention and interdiction of crimes.