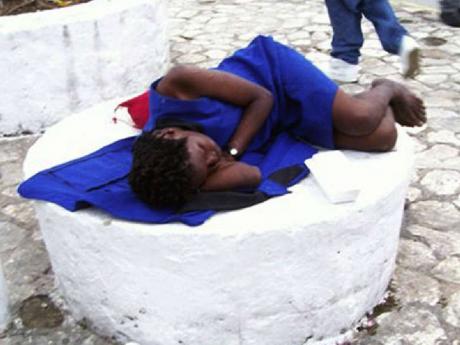 THE EDITOR, Sir:
The city of Montego Bay has a major problem - that of an ever-increasing number of street persons. Many of them can be seen in and around the Sam Sharpe Square area and on nearby streets. There are more than 50 persons living on the streets of the city, and they are suffering from a number of medical problems, including mental illness and drug addiction.

These street persons have been grossly neglected by the State, and hence they are oftentimes spat on and abused daily. It is absolutely reprehensible, scandalous and disgraceful that the St James Parish Council, Cornwall Regional Hospital's Psychiatric Department and the members of parliament (MPs) could have the conscience to sit idly by and allow those homeless persons to be living on the streets of the city every day. Even during rainfall they can be seen soaked, asking for assistance as people pass them by.

I try my best to assist them whenever I can, and even sometimes I and a few other social workers and professionals take meals for them once per month. They are oftentimes very hungry and have no one to provide them with meals and the necessary medical treatment that would allow some of them to be stablised in their medical complications.

Some of those street persons are bottomed-out drug addicts who are earnestly seeking to recover from their obsession but have no assistance from the State in this regard, unlike in modern, civilised countries where the required drug-addiction treatment is given to them when requested, and where some of them do recover to become productive citizens.

Further, the drug-rehabilitation ward at the Cornwall Regional Hospital has been closed for the past eight years, which is in itself unacceptable, disturbing and disgraceful, to put it bluntly. This means that drug addicts who are residing in western Jamaica have no publicly funded medical hospital facility to receive their treatment from.

Are we living in a country which takes and treats drug addiction seriously? Do we care about these citizens of this country despite the unfortunate situation that they have found themselves in?

It is of fundamental importance that Minister of Health Dr Fenton Ferguson take the necessary steps to have the drug-rehabiliation ward at the hospital adequately staffed, equipped and reopened expeditiously and have those street persons from Montego Bay removed and placed into a facility that will provide them with the necessary medical treatment. They have rights under the recent replacement of Chapter 3 of the Constitution - the Charter of Fundamental Rights and Freedoms.

Those mentally ill persons are in urgent need of the relevant medical treatment, and they are constitutionally entitled to such at any given time.

Why doesn't the St James Parish Council establish a fully functional night and day shelter for those many street persons who are excruiciatingly suffering? I am callling upon the St James Parish Council and Mayor Glendon Harris, as well as MPs Derrick Kellier, Lloyd B Smith, Sharon Ffolkes-Abrahams, Edmund Bartlett and Horace Chang, along with Minister Ferguson, to take the desirable steps to implement a sustainable programme of assistance.

Under the Mental Health Act, the police have the legal authority to assist the competent prescribed authorities to take mentally ill persons to a medical facility for treatment. Failure to comply with a request from the authorities to the police can result in the police being charged for dereliction of duty.

The police have a duty and responsibility to comply with requests from persons wishing to take mentally ill persons to a medical facility, as is warranted. Action is required from the State now in this regard.

Persons who abuse street persons should be firmly prosecuted by the police and brought before the courts, as is the case in civilised and economically advanced countries.