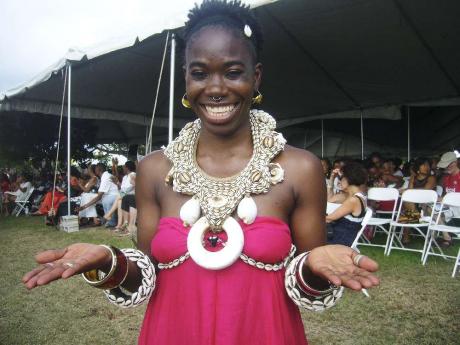 Calabash Literary Festival is not all about literature, literature, and more literature. It's an event where the coolest and most avant garde fashion is on display, and D'bi Young, Jamaican-Canadian dub poet, was not going to be outdone on Saturday, May 26, at Calabsh Bay, St Elizabeth. 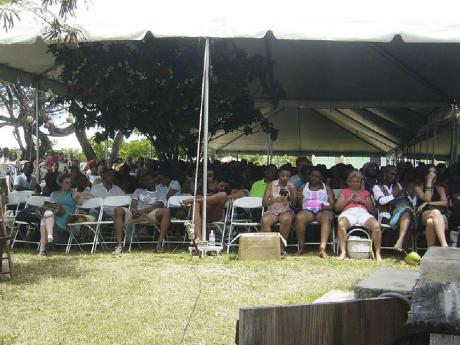 A section of the capacity audience at Calabash Literary Festival on Saturday, May 26, at Treasure Beach, St Elizabeth. 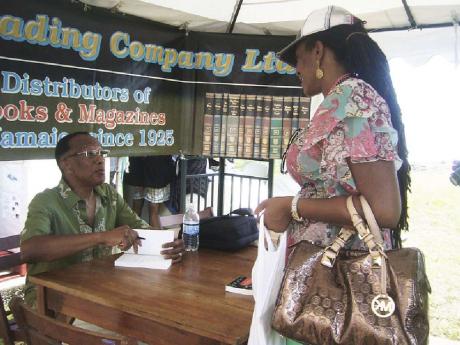 Renowned author and sociologist, Jamaica-born Professor Orlando Patterson, listens to an eager fan and patron just before he signs one of his books on Saturday, May 26, at Calabsh Literary Festival. 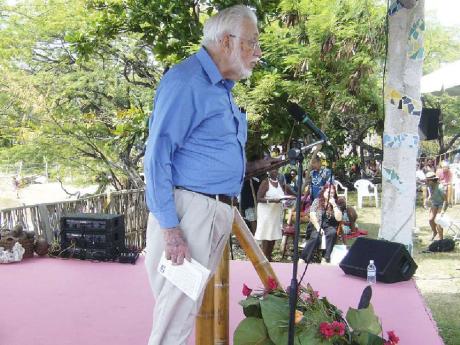 With his wit and candour, businessman and poet, Ralph Thompson, cracks up the audience at the Calabash Literary Festival on Saturday, May 26, at Treasure Beach, St Elizabeth.
1
2
3
4

IT'S A LAID-BACK, serene community beside the sea at Calabash Bay, St Elizabeth, but for one weekend in May for over a decade, except for last year, it would be overrun by lovers of literature and the arts. But after the one-year hiatus, Calabash Literary Festival returned to this scenic town with much buzz, from May 25-27, under the theme 'Jubilation', in commemoration of Jamaica's 50th year of Independence.

With renewed zest and excitement, the literati and the curious descended upon the venue by the sea, happy for its return, and to participate in the jubilation. They were not disappointed, for there was a variety of presentations from poets and authors from the United States, the United Kingdom, Africa, and the Caribbean, who shared spoken and written word.

The highpoint of the weekend was perhaps the frank, witty, and insightful conversation between Kwame Dawes, one of the organisers of the event, and Professor Orlando Patterson, renowned Jamaica-born cultural and historical sociologist, and author of the much-acclaimed novel Children of Sisyphus. This was on Saturday, May 26. Patterson spoke about, inter alia, how a meeting with Caribbean literary giant George Lamming might have caused him to make a certain career decision.

The chat between South African writer, activist, and former government minister, Ronnie Kasrils, and Paul Holdengrab also kept the crowd in rapt attention as Kasrils spoke about his and his wife's involvement with the ANC during the period of apartheid when they were young and in love. Among his many publications is Unlikely Secret Agent, the biography of his extraordinary wife, Eleanor, about whom he told some humorous and, poignant anecdotes.

In addition to the literary offerings, there was musical entertainment from No-Maddz and Raging Fyah on Friday night, a sound clash between Jamaica and South Africa called 'Cala-clash', eclectic fashion statements, traditional Jamaican food and drinks, and a bonfire at midnight on Saturday. The weekend climaxed on Sunday night with performances by the Calabash Acoustic Ensemble of Wayne Armond, Ibo Cooper, Seretse Small, and Steve Golding, after which peace and sobriety enshrouded Treasure Beach once again.