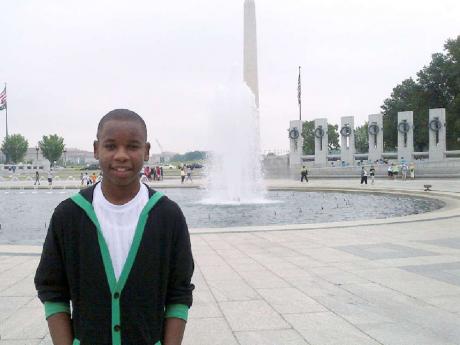 The Gleaner's Children's Own Spelling Bee champion, Gifton Wright, enjoys a tour of a World War II Memorial in Washington, DC. Gifton placed fourth in the final of the Scripps National Spelling Bee at the Gaylord National Resort and Convention Center in National Harbor.

"IT WAS awesome! I feel great; almost speechless!" was how 14-year-old Gifton Wright Jr described his outstanding performance and experience at this year's Scripps National Spelling Bee at the Gaylord National Resort and Convention Center in Oxon Hill, Maryland, in the United States.

"The competitors were great and I enjoyed myself. It was amazing. I knew I would have reached this far and was hoping I would win, but I'm happy for the amazing experience," he told The Gleaner yesterday from Maryland.

On Thursday, Gifton tied for fourth place in the final after competing against 278 spellers from the United States and other countries invited to participate in the three-day competition. Coached by the Reverend Glen Archer, who has conditioned an impressive 23 national winners, Gifton lost out after he misspelled the word E-R-I-C-E-T-I-C-O-L-O-U-S, which means inhabiting a heath or similar habitat.

The grade-eight Kingston College student said he was glad to breathe a sigh of relief after months of hard work, dedication, unwavering focus and a positive attitude.

After a good night's sleep, Gifton spent yesterday relaxing, sightseeing, shopping and enjoying as much as he could in the one day he had left in the city.

The teen heads back to Jamaica today to finish the school year and prepare himself for next year's Schools' Challenge Quiz. He also hopes to play some football and chess over the summer holidays.

Back at their home in Tawes Meadows in Spanish Town, St Catherine, his mother, Marie Wright, could not contain her excitement. She said ever since he left the island, she had been in constant prayer and fasting for his success.

"He is such a very humble person and always puts his all in everything and is determined to win. He approaches everything with an attitude to win."

The devout Christian said the spelling champ's father, Gifton Sr; his family, the entire community and "the whole Jamaica" were very proud.

"I don't know how we can thank The Gleaner for giving him this opportunity," she stated.

Karin Cooper, The Gleaner's business development and marketing manager, who accompanied Gifton to the Scripps competition, was beaming with pride at his achievement.

"Everything went very well; Gifton performed brilliantly and we are so very proud of him. He got a lot of support from the audience, who were very impressed with the way he handled himself. Everyone commented on his humility and manners," said Cooper.

She said The Gleaner was very committed to the Spelling Bee programme, now in its 54th year.

"Over the years, we have seen the development in the children who have been associated with it, and we are indeed committed to continue doing it. This is part of The Gleaner's ethos to help the nation develop. The more children that we can impact to realise their full potential, the better our society will be, even if we do it one student at a time," noted Cooper.