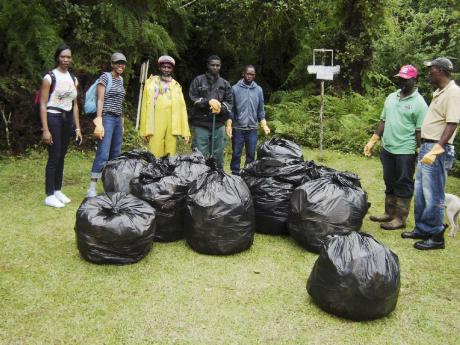 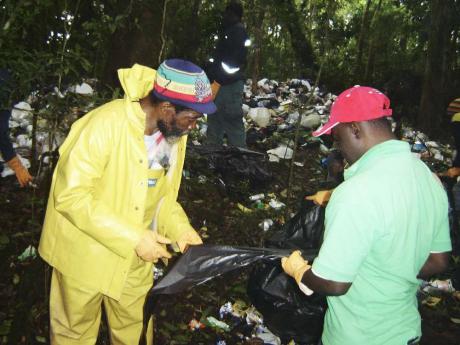 A team, led by representatives of the Jamaica Conservation and Development Trust, engages in clean-up activities at Portland Gap, St Thomas, en route to the Blue Mountain Trail on Labour Day. - Contributed
1
2

THE INCREASING volume of non-biodegradable garbage being accumulated in Portland Gap, St Thomas, the last community en route to the Blue Mountain Trail, is worrying for environmentalists.

A one-hour clean-up operation on Labour Day yielded 16 jumbo-size garbage bags of refuse comprised mainly of plastic bottles and bags, styrofoam cups and plates, as well as pans of various sizes. For Stacy-ann Robinson, executive director of the Jamaica Conservation and Development Trust (JCDT), who participated in the clean-up, it was depressing.

She is very concerned about the potential health risks, as well as long-term negative impact on the ecosystem. "The garbage is unsightly and harbours pests, including rats and cockroaches which can carry disease. It is taking up large quantities of very limited space and most of it is not biodegradable, so it just stays there," Robinson told The Gleaner.

Although it is illegal to litter within the boundaries of the Blue and John Crow Mountains National Park, the park rangers do not usually catch people in the act. Further to this, the amount of garbage being deposited by hikers is more than the bins can accommodate.

Robinson admitted: "There is so much garbage left behind that the rangers are not able to take it all back down to Kingston for disposal, so it has been collecting."

She is appealing to hikers to think carefully about what they carry in order to reduce the amount of packaging and disposable material they take into the area and to plan on bringing their non-biodegradable garbage down from the peak.

Meanwhile, D. Susan Otuokon, consultant to the JCDT, noted that the sustenance and shelter provided by the garbage could contribute to growing the population of the pests. Otuokon also pointed to the need to do more to make people aware of the importance of preserving the biodiversity of the national park, its connectivity and far-reaching impact on communities which are literally far removed.

The high elevation and unusual geology of the Blue Mountains have resulted in a wide variety of forest habitats, some of which are unique to this part of the island. The area is an important refuge for endemic and endangered species of plants and animals with 30-40 per cent of Jamaica's endemic flowering plants found only in the Blue Mountains.

The JCDT is planning a series of monthly clean-ups and interested persons can contact the office by calling 960-2848-9.