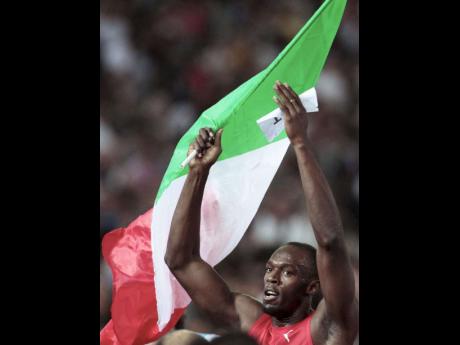 Jamaica's Usain Bolt celebrates with the Italian flag after winning the men's 100m event at the Golden Gala athletics meeting in Rome on Thursday. - AP

What was the Jamaican Usain Bolt thinking when he grabbed an Italian flag and paraded around the track after winning the 100m race in 9.76 seconds at the Samsung Diamond League meet in Rome on Thursday, May 31?

Before the race, he warmed up the crowd wearing the shirt of the Italian football team.

In all my years of watching track and field events on television, I have never seen anything like this.

At the Ostrava track and field event a week earlier, he appeared at a news conference wearing a New York Yankees baseball hat. Does Bolt have an endorsement deal with The New York Yankees?

Where are his handlers? Has all that money gone to their head?

It was such a great race. But for Bolt to celebrate a victory lap with another country's flag was such a huge let-down for this viewer.