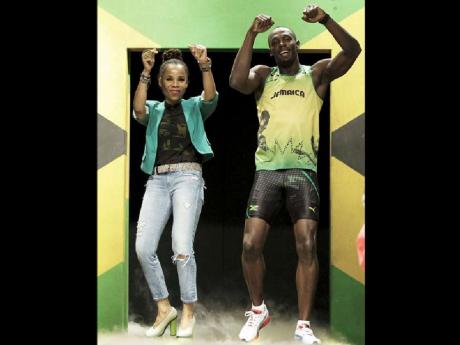 USAIN BOLT was the centre of attention again in London yesterday afternoon. Fresh from storming back to form by winning the 100m at the Rome Diamond League meeting in 9.76 seconds on Thursday, the world's fastest man was in attendance as the Jamaica Olympic Association and PUMA yesterday launched the Jamaican team uniforms for the London 2012 Olympic Games, including podium and ceremony wear.

Bolt, the reigning Olympic champion, said: "Preparations for the Games are going well. I've just got to keep working hard."

When asked if he could go any faster, he told host Trevor Nelson: "That's what I do!"

"The season has only just started and Tyson [Gay] has not run yet. I can run faster but there is a long way to go. I'm just looking forward to the competition but I'm ready to go."

Bolt was disqualified from the final of the men's 100m at the World Athletics Championships last year as compatriot Yohan Blake took gold. The incident has clearly not shaken his confidence.

"I've never doubted my ability. Every athlete has a bad day whether it be football, cricket or basketball. Last year was one of mine but I'm just looking forward now.

Marley's designs will be worn by the entire
team (men and women). Marley, the eldest daughter in the Jamaican family
dynasty, underscores the brand's long-time commitment to the Caribbean
nation, with its rich cultural heritage, global music contributions and
its unparalleled dedication to athletics.

"It is truly
an honour to design this collection for my home country and my home
team," said a visibly proud Marley.

"It's not even a
dream come true because it's something I never dreamed would be
possible.

"I ran track in high school in Jamaica and
I'm still a huge fan of Jamaican athletics, so to have a role in
creating the outfits for our Olympians is a thrill."