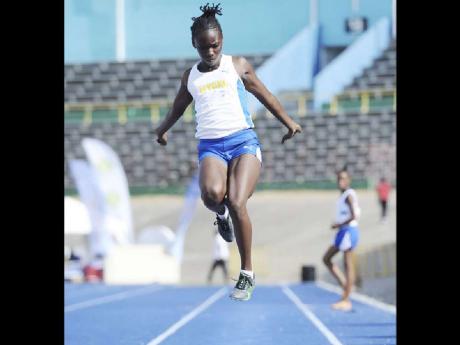 Jamani Richards of Hydel Preparatory School winning the girls' Class One long jump with a leap of 4.92 metres at the JISA/ CapriSun Prep Schools Track and Field Championships at the National Stadium yesterday. - Ricardo Makyn/Staff Photographer

Defending champions Hydel are poised to retain their title at the three-day JISA/CapriSun Prep Schools Track and Field Championships, going into today's final day at the National Stadium.

Corey Bennett,
coach of Hydel, said they are confident of victory going into today's
final day of the championships.

"I am very confident
because we are in a lot of individual finals," said Bennett. "We are
also in a number of relay finals and, as you know, the relays carry a
lot of points and so I expect us to do well," Bennett
added.

Liam Martin of Stella Maris was the star of
yesterday's second day, when he captured the boys' Class One long jump
in a meet record 5.51m, erasing the previous mark of 5.44m. Jaise Foster
(5.46m) of Hydel was second while Xavier Nairne of Mona copped bronze
with a leap of 5.34m.

"I am feeling happy and elated,"
said Martin. "Words can't explain the way I am feeling .... to know
that I broke the record," said the 12-year-old
Martin.

Martin is down to compete in the 100m and 200m
finals and is among the favourites for gold."I think that I can win
both events because I have been training very hard to achieve this,"
Martin said.

Meanwhile, Noellea Mason of Hydel
captured her second gold medal of the championships, when she won the
girls' Class Two high jump with a leap of 1.35m in front of Mona's
Arielle Hamilton (1.25m) and Aaliyah Whyte of Quest, 1.25. Mason
pocketed her first gold medal on the opening day of the meet when she
won the Class Two long jump.

Kristina
Davis of Ardenne cleared 1.50m to win the girls' Class One high jump
ahead of Shannon Bailey of Vaz (1.45m) and Melika Jackson of Our Lady of
the Angels (1.40m).