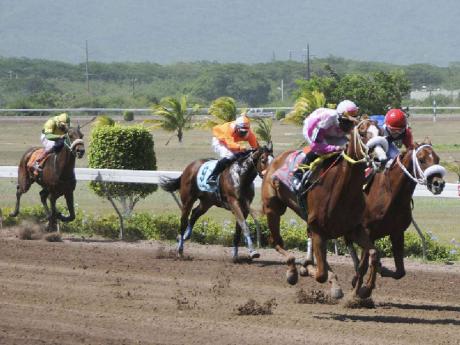 First-time runner DEO VOLENTE, with Dane Nelson in the saddle, sweeps by MENTALIST (Dick Cardenas) on the way to winning the 3-y-o Only Maiden Condition race over 1200 metres at Caymanas Park on Wednesday. The front duo are trailed by MOVIE DIRECTOR (second left), with Rayan Wilson up, and VIBES MASTER (Devon A. Thomas). - Gladstone Taylor/Photographer

COMMANDING CHIEF, who failed by a short head to beat subsequent Horse of the Year SAINT CECELIA in last November's Gold Cup at 1400 metres, should outclass rivals in the 17th running of the Jamaica Thoroughbred Racing Hall of Fame Stakes Trophy open-allowance feature over 1200 metres at Caymanas Park today.

Confined to three-year-olds and up, the race offers a total purse of $886,000 and will be contested by nine starters.

COMMANDING CHIEF won impressively over the same distance on his May 19 season debut, blowing away overnight-allowance horses in the smart time of 1:24.3 with 56.0kg.

Many are still questioning how a proven grade one campaigner like COMMANDING CHIEF was able to come down two classes to overnight company and make short work of the opposition going wire to wire.

Truth is the 4-y-o son of War Marshall-She Knows Beau was absent from active competition for six months. This, in accordance with the rules, made him eligible to step down.

Although yet to win going as short as 1200 metres, COMMANDING CHIEF can definitely sprint-based on his Gold Cup performance (always prominent behind fast slips) and his style of running.

He represents the class horse of the field and reporting even better for this race, should successfully allow weight all around and win this trophy with topweight of 57.0kg and his St Leger-winning jockey Paul 'Country' Francis riding for trainer Everal Francis.

While his class should see him through, COMMANDING CHIEF can expect worthwhile opposition from the American 4-y-o filly, SARAH BARRACUDA, from the Gary Subratie stable, as well as JET SETTER, who is conditioned by champion trainer Wayne DaCosta, not to mention the consistent native-bred fillies PALACE GOLD and SWEET TRAIL.

I am expecting COMMANDING CHIEF to race in close touch of CLASSIC BEAU, SWEET TRAIL, and PALACE GOLD before getting into top gear entering the straight and win from JET SETTER and SARAH BARRACUDA.

Also on the pre-derby Hall of Fame programme is the annual renewal of the 3-y-0 and up overnight allowance race over 2000 metres for the Ren Gonzalves Memorial Cup, which looks tailored for the Subratie-trained American filly LADY MACBETH (Francis up); the Leslie McRae Memorial Trophy over 1100 metres (3-y-o maiden special) to be run in two divisions; along with the annual Walking race in aid of charity (Children First).

Other firm fancies on the card are ROCKETEER and TIGRENIAN in the respective sections of the Leslie McRae Memorial Cup; SAINT THERESA to rebound in the first; STAR FLYER in the fifth; and LIKKLE BIT to go one better in the eighth.