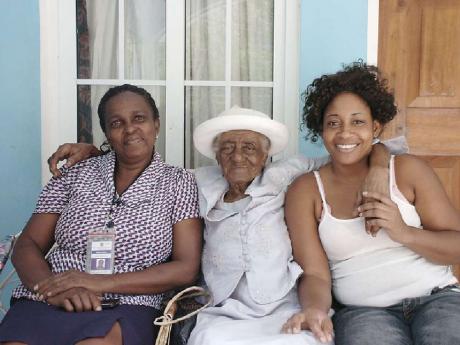 Although she is a year shy of her 100th birthday, Naomi Johnson of Crawle district in Duncans, Trelawny, is still active and carries out her daily activities with no trouble.

She was born in Crawle in 1913 and is the oldest of eight children for her parents, Joseph Hyatt and Elizabeth Cunningham.

"My father had eight children, but only two leave now, as the others died. I am the oldest one for everyone. My parents, they were doing much work in those days. They'd go to the sugar estate, do reaping of cane, and all that," said the senior citizen.

"I was in charge of taking care of people, giving them work to do and then look after them the best I can," she added. "I went to Duncans All-Age School, but I never went to any more school after that; I had to go and work."

Miss Naomi also recalled marriage to her late husband, Stanley Johnson, in 1947. The couple had 13 children, nine of whom survived to adulthood.

"I had to work so hard for them - that they could get something to eat - because I never had nobody. My mother died when I was a small girl, about four years old. I tried my best," she told Western Focus.

Family friend Nadene Smith shared that Miss Naomi has always been a devout Christian who regularly worships at the nearby Spicy Hill Church of God.

"She's a very religious person, and she always goes to church. She's helped out a lot of persons," Smith noted.

"She's a very strong person; she doesn't wear glasses. She'll leave from here go to Falmouth. Sometimes she used to go to Kingston on her own."

Granddaughter Narasia Bennett fondly remembered that it was Miss Naomi who raised her.

"I feel like she's my mother, my grandmother, my best friend, my everything that I can think of. She's my idol. When I was growing up, my mother left me, and she was always there with me," Bennett said.

"When I was having my daughter and son, she was at the hospital with me, like she wanted to deliver my kids herself. She's the best thing I can think of."