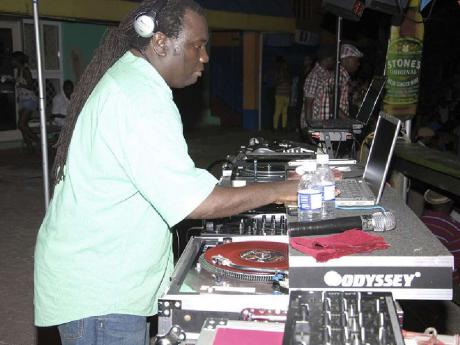 Promoter Nash 'DJ Turbo' Lawson at the turntables during his Off Tha Wall party at Pier One in Montego Bay, St James, last weekend. 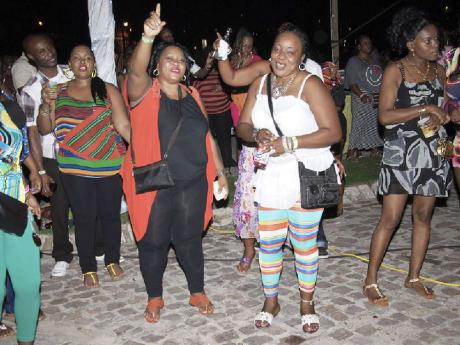 Patrons at the Off Tha Wall party last weekend.
1
2

The scenic Pier One complex in Montego Bay was transformed into a bubbling cauldron of musical excitement last Saturday night going into Sunday morning. True to tradition, the first of the biannual Off Tha Wall retro party was an absolute blast!

After a somewhat uneventful juggling phase between 10 p.m. and 11:30 p.m., the tempo was raised going into the midnight hour with promoter Nash Lawson, in his deejay Turbo persona, taking the turntables by storm. Here, he delighted patrons with his selection of '70s-style disco music.

Songs like One Night Love Affair, Never Knew Love Like This, Rock The Boat, Victim, Gloria Gaynor's stunner I Will Survive, and Donna Summer's Bad Girl reverberated around the venue and delighted the grand mix of old-school party fans and young revellers.

The tempo climbed several notches when DJ Turbo changed the pace to lovers' rock and was greeted with deafening screams as he opened with Beres Hammond's One Dance. Patrons all but went berserk as he followed up with She Loves Me Now from the same singer, before shifting into overdrive with Buju Banton's Browning and Love Black Woman.

When DJ Turbo made way for fellow selector, Baby Thug, the patrons, who had gleefully soaked up his closing selections from the archives of Barrington Levy, Terror Fabulous, and Admiral Bailey were in full party mood as perspiration-soaked bodies bubbled and gyrated under the stars.

Baby Thug kept the vibe going by going the calypso route, much to the delight of the patrons. Songs like Ragga Ragga, Dancehall Soca, Workie Workie, Tiney Winey, and Love and Unity all flowed out of the speaker boxes as the late arrivals to the party joined the fray.

To show his versatility, Baby Thug closed his stint by going rock and roll, squeezing off songs like Little Suzie, Rock & Roll, and All Stood Up with real authority. He then made way for FAME FM's DJ Marvin, the third of the trio of selectors, who controlled the turntables for the night.

DJ Marvin had the old-school dancehall fans at his mercy. Very few of the hits of the '80s and '90s were spared as he demonstrated his fantastic knowledge of music, his juggling skills, and his capacity to entertain.

The venue was overflowing with joy as DJ Marvin reeled off songs like Super Cat's Under Pressure, Johnny Osbourne's Buddy Bye, alongside other selections such as Flourgon's We Run Tings; Red Dragon's Fresh, and Major Macherel's If Me Ugly Like You.

When the cycle returned to DJ Turbo, the party was boiling, and he added further fuel to the fire, playing a colourful medley of songs from Bounty Killer and Beenie Man. The screaming fans had an absolute ball, singing and dancing along. For good measure, he tossed in several songs from Mad Cobra and Ninjaman.

As the 4 a.m. cut-off time approached, DJ Marvin returned and went the current dancehall route, which resulted in the youngsters taking over the party. Songs from the likes of Lady Saw added a raunchy flavour to the morning as the old-schoolers became spectators, watching the youngsters go wild.