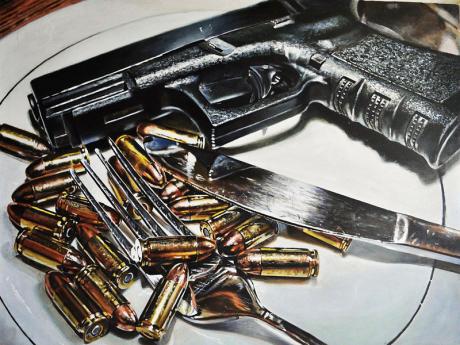 Works are by a wide variety of Jamaica's greatest artists, both the older masters whose works fill the important collections and the younger generation that is carrying the torch onwards. Jamaica's art world is a fascinating place, filled with wonderful characters, stories and bursts of genius. This exhibition manifests all of this.

Highlights include a series of works by great artist Carl Abrahams. These works include a romantic seascape 'Island in the Sun', one of his glorious angel paintings, and a set of pencil and watercolour sketches that are intriguing, collectible and affordable. Carl Abrahams was a pioneering genius of Jamaican art. He began as a cartoonist and studied with the Welsh painter Augustus John. Lyrical, luminous and brilliant, Abrahams is rightly regarded as one of the founding fathers of Jamaican art.

Jamaica's great landscape painter Albert Huie is represented by two glorious landscape works and a number of portraits, including 'The Man with a Hat', 'The Golden Boy' and a female nude. Considered by many to be Jamaica's most prominent artist, Huie was part of a group of artists that started their careers in the 1930s under the instruction of Koren der Harootian. He is noted for his highly accomplished impressionistic style, with little dabs of oil paint that coalesce and form at a distance, yet his themes are wholly Jamaican.

The magnificent surrealist Colin Garland has a number of romantic works, including an ethereal Madonna and a pair of noble horses, male and female. Although born in Australia, Garland made Jamaica his home and his work is filled with the light and magic of the island. In the words of Jamaican art historian Petrine Archer-Straw "Inspired by both Haitian and Jamaican self-taught painters such as John Dunkley, but underpinned by a taste for the fantastic, in the works of artists such as Botticelli, Bosch, Giuseppe Arcimboldo and Richard Dadd, he brought a wry, intellectual humour to his depictions of life in the Caribbean."

Edna Manley's classic lithographs include 'New Moon', 'Sunrise', 'Sunset', 'Wind and Rain', 'Into the Sun', 'Horse of the Morning', and 'Moses'. This limited edition is rightly revered by many collectors as an outstanding body of work by an artist who did much to shape and form modern Jamaican art. Although nearly 30 years old, these works remain fresh and strong.

Individual works that shine very brightly are Seya Parboosingh's 'My Mother at the Beach' and a glorious 'Mother and Child' by Nelson Cooper that captures the loving intensity of a mother's bond with her child. The 'Ancient Sawyers' by Gaston Tabois is a bright, dramatic mosaic of Jamaican life and colour. There are also two magnificent sculptures by Winston Patrick that are part of a limited edition. Laura Facey's deep and delicate piece 'Salt Kilns' is a beautiful reflection from her time living in Salt Island.

Of the younger generation, there is Khary Darby's magnificent 'Leda', a beautiful and slightly disturbing image referring to the Greek myth of Leda and the Swan, Oliver Myrie's 'Dark Rider', a powerful work by Michael 'Flyn' Eliot and one of Tricia Gordon-Johnston's Genesis Series.

The exhibition runs from May 24 to June 7, finishing with an auction at 7 p.m. on Thursday, June 7. Donations will be made to various charities.