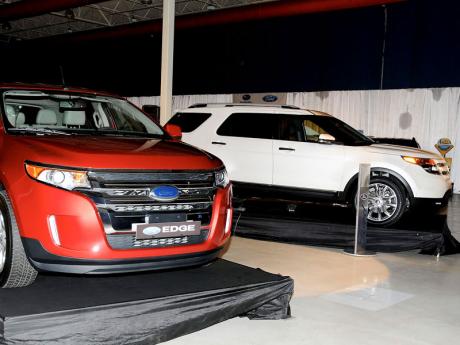 For vehicles on display, many dealers use a partical model's name where the licence plate would normally be - file. 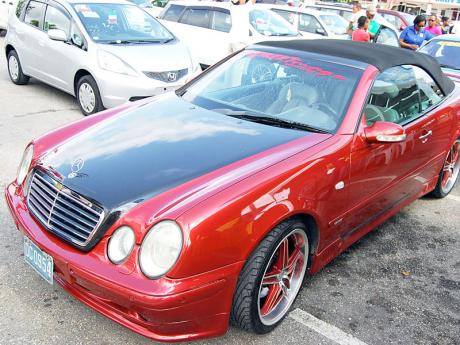 Across the island, the colour of a motor vehicle's licence plate indicates its purpose. Plates with yellow are for government, red is for public passenger vehicles, green for commercial vehicles and white for private passenger vehicles.

Among the least common is blue for demonstration purposes.

Demonstration licence plates, commonly called dealership plates, are those registered to car dealerships and are used for showcasing vehicles to customers, moving vehicles from bond stores to dealerships and for promotional purposes, such as automobile shows. Drivers of these vehicles are allowed to carry the number of passengers specified under the law.

The plates cannot be owned by an individual, like private licence plates.

According to Kent LaCroix of Stewart's Auto Sales "It is not illegal for drivers to have more than one passenger in the vehicle, since more than one customer could come in to a dealer for the car to be demonstrated, or for the representative of the dealership to go to the customers to demonstrate the vehicle."

These plates, DC for cars designation, and DT for trucks, are obtained from the Jamaica Tax Administration's (JTA) offices, with a minimal number being issued to dealerships, and are used for both new and used vehicles. The JTA possesses a register recording all plates issued and determines how many should be issued to any one dealership.

In addition to the initial cost, dealership plates also have to be renewed.

It is not a licence to breach other aspects of the law, as LaCroix stated that "each vehicle bearing these plates should carry an up-to-date insurance policy, duties (must be) paid and possess a valid certificate of fitness".

Demonstration plates can be transferred as they are not specific to a motor vehicle, but rather the dealership specific. The time for which plates can be kept depends on dealers.

Interestingly, it is becoming normal for vehicles to be on demonstration without the use of the blue plates. President of Kia Motors Jamaica and Worldtron, Dwight Moore, noted that it has become increasingly difficult to acquire demonstration plates from government, especially for smaller dealerships.

"The government is aware of this issue. I have seen the police capture fraudulent demonstration plates, and the issue of plates being used in illegal activities is likely to be going on well over 10 years. I had to surrender all my WorldTron DC plates because of this", Moore said.

"I surrendered the plates to the Tax Enforcement Authorities, and it is difficult to get replacement plates from them," Moore said.