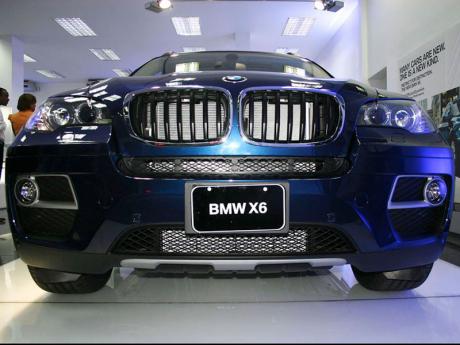 The imposing front of the BMW X6 LCI.

The harsh economic climate has left many car dealers crying about the molasses pace of sales, with most of their inventory gathering dust. However, that has not been the case with BMW, one of the world's leading premium motor-vehicle brands.

So with the launch of the BMW X6 LCI taking place on Wednesday, two days before the tax increase on vehicle purchases, Stewart invited his audience to sign up on the spot and cash in on the special sales prices which could see them saving between $400,000 and $1.4 million on the vehicle of their choice - final price subject to the options decided on. Still, given their role in keeping the BMW dealership at the front of the local premium segment, it is not likely that this appeal sent anyone scampering for their cheque book.

After all, who skimps when it comes to buying 'The Ultimate Driving Machine'?

Year to date, the dealership has sold 78 units, a 39 per cent increase over last year's sales and 59 per cent higher than the nearest competitor in the premium segment. It is no wonder that the CEO for BMW's Latin America and Caribbean division "is very optimistic, with high expectations from all models that will be launched in 2012".

This optimism is based on the fact that BMW Group ended 2011 with the highest sales in its history in Latin America and the Caribbean, selling a record 20,656 BMWs, Minis and BMW motorbikes. During that period, the group sold 1.7 million cars worldwide and more than 113,000 bikes.

Stewart attributed the remarkable popularity of the X vehicles in the Caribbean and Latin America to the superiority of their X12 all-wheel drive system. The world's first sports-activity coupé, the BMW X6 offers a unique combination of sporty dynamics and supreme versatility, paired with selective modifications in design and innovative equipment features.

Promoted as outstanding in performance and impressive in appearance, with engines lending it the driving characteristics of a sports car while the chassis design combines athletic coupé curves with the tough presence of an SUV, this 'crossover' characteristic is Automotives' sole criticism of the X6. It's a concern I have had since its debut in 2008 and, even though I personally have no trouble with it, I find the running board too high for such a darling of a vehicle (notice I did not say 'car'). This is because I have some trouble seeing the BMW X6 as a 'her', like I do with all other cars. My perception of it as a 'tom-boy' was reinforced by the set of 255/50/19 wheels - definitely nothing ladylike about those.

Still, for those in the know, as usual, BMW must have got it again, with Audi and Mercedes also working on their versions of the sports-activity coupé.

Stay tuned for next week's review when Automotives shares more about the extensive range of innovative features on the latest BMW X6, which is available in petrol and diesel. Both are available in in-line six cylinder and V-8 configurations.