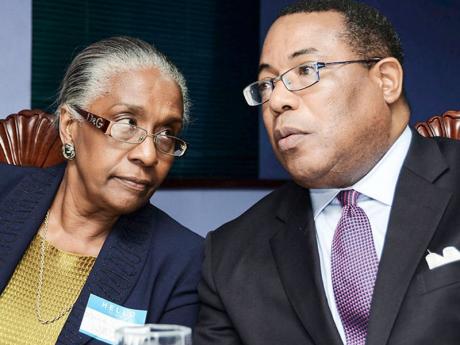 Minister of Industry, Investment and Commerce Anthony Hylton (right) in discussion with president of Women Business Owners Limited, Lorna Green, during a business seminar on raising capital on the Jamaica Stock Exchange, held at the Guardian Life Auditorium in New Kingston, on May 30, 2012. - JIS

Minister of Investment, Industry and Commerce Anthony Hylton says companies in emerging industries and others with a strong retail brand are the best candidates for initial public offerings (IPO).

But he warned that for small and medium Jamaican companies seeking to go public via the stock market, the process could be lengthy.

"The IPO process can last as long as two years," said Hylton at a seminar for women owners of business. The process involves registration with the authorities, organisational change and the hiring of auditors and accountants.

The best candidates for IPOs, the minister said, are companies that are growing at least 10 per cent annually and which have no more than 25 per cent of capitalisation in the form of debt.

He was speaking at an IPO seminar staged jointly in Kingston by the Mona School of Business (MSB) and Women's Business Owners (WBO) to provide the female company heads with local research on what it takes to execute a successful offer.

Dr William Lawrence, director of the Professional Services Unit at MSB, told the business owners the IPO process might also involve surgical changes to turn their companies to position them as high value propositions for investors.

A number of small Jamaican companies have been taking opportunity of a 10-year waiver on corporate taxes for new listings on the JSE Junior Stock Exchange to raise equity capital.

Lawrence, presenting on the topic 'Going Public: Managing SME Turnaround', said that companies in search of a better value profile need to ask themselves some tough questions.

"Can you pay your bills on time? If you can't, you need to restructure your financing, reschedule debt, sell equity, sell assets or a combination of all of these. Secondly, is the reason for the problems being faced by the company inside the organisation or outside? If the root cause is external, the business has to change strategy. For example, if you are competing on price, one has to look at competing on value added," he said.

Lawrence said a recently completed survey of 262 SMEs across Jamaica's 14 parishes revealed an over-reliance on price to compete.

"There is an urgent need for business education on how to use non-price strategies," he said.

Companies also need to be schooled on how to improve efficiencies, he added.

"To recover from losses, the company also has to become more efficient. Many companies look only at the bottom line - at waste and costs - but there is another way around this. It is to increase the top line - expand output by scope and not by scale," said Lawrence.

"Achieving economies of scale frequently require resources which, are beyond the scope of SMEs. Instead, one can diversify the product, making every little bit count."

According to Lawrence, two similar businesses can have the same waste and the same cost but different efficiencies because of differing scope.

The third and final question to be asked for a company seeking to turn around its operations, he said, is: are the actions taken working?

"Two companies now listed on the junior exchange engaged in turnaround activities before they could list. AMG Packaging, which is now on the exchange, broadened its scope using strong cash flow," he said.

"Cargo Handlers did not have the cash and value added was so low that liabilities exceeded assets. What Cargo did was to restructure debt and then use the IPO to bring debt levels down. Cargo Handlers is now stalwart," the academic said.

Both companies' IPOs were oversubscribed, he added.

He then advised business owners to return some profits to the company so that it will have resources to tap into in periods of downturn.