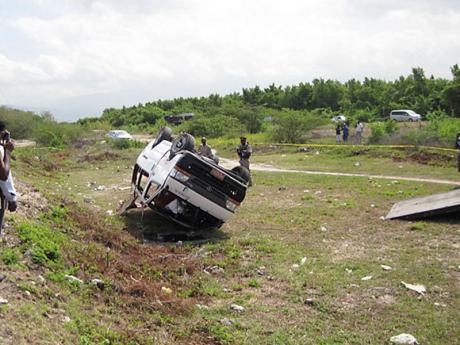 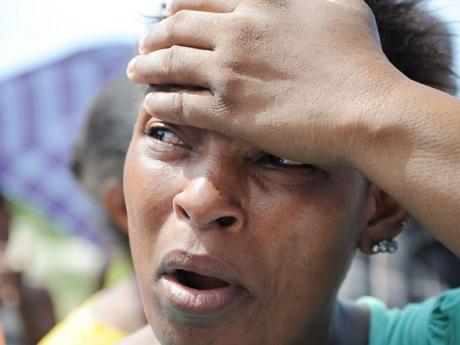 Opal Kerr mourns the loss of her son Lennox.
1
2

Last week, a minibus driver, in a desperate attempt to evade the police and Transport Authority (TA), crashed his vehicle laden with passengers. When the dust settled, a teenage boy had his life snuffed out. That is the first part of the sad story. Somewhere in-between when the incident took place and the discussion in the media, another tragedy struck. The truth died.

I am totally incredulous that there is anyone who even thinks for a moment that it is the police and other agents of the State who are responsible for the crash. The objections expressed by a number of persons interviewed for the purposes of the news are amazing. Large numbers of dissidents take issue with the 'fact' that the driver of the ill-fated minibus, the man with more tickets than a tout at a sporting event, was being overzealously chased by TA officers and the police.

Even more puzzling is the revelation by head of the Traffic Division, Senior Superintendent of Police (SSP) Radcliffe 'Hard-talking and Fearless' Lewis. Defiant in his defence of the police under his command and the officers of the TA, Lewis rubbished any claim by 'liewitnesses' that there was a chase. Indeed, the only notion of a chase was that the story was watered down and modified by the time it was given the media to drink.

It is common knowledge that, in the past, there have been rapid vehicular pursuits of suspected offenders by the TA, with men and women of the constabulary riding shotgun. Indeed, cameras and truthful witnesses have seen evidence of this scene and a prudent entrepreneur could sell the footage to Tru-Tv for one of the popular shows such as Cops, Bad Boys or the Most, where oftentimes it is both the speed of the chase and that of the driver that are both high.

Prudently, the producers of the show only reveal those incidents where the perpetrators have so much difficulty standing upright and speaking straight that they are reminiscent of some politicians faced with being honest to their constituents. To the annoyance of the police, although they are not shown, large numbers of fugitive drivers escape the cops and disappear faster than the optimism of poor people after a Budget is read. Yet, many chases end in awful tragedies, as drunken, drugged, reckless or just plainly stupid drivers put pedal to metal and endanger the lives and property of innocent bystanders.

Apart from the artfulness or the street craft of the runaway drivers, a major reason for them not being apprehended is that the American police are trained to use only as much effort as is necessary to catch the suspect without or with a minimum of collateral damage. It reflects the entire schema of the Western democratic justice systems such as those of the Commonwealth and the United States: It is better for a thousand guilty men to escape punishment than for one innocent to suffer.

Nevertheless, only rodents compete in rat races and cat-and-mouse games. Guilty rats and craven mice cower and run. But innocent, responsible and real men never run from pusses. It is a crime to run to escape arrest, and many of the idiots on the television programmes escalate their misdemeanour to major felonies by the simple act of taking flight. Escaping custody or eluding arrest is a serious offence in the United States, and if you doubt me, call any America-based attorney. Despite your getting a busy signal, the proper response will come.

Nevertheless, American drivers get major bouts of nervousness when they see the blue light flashing in their rear-view mirrors, because they know that when Officer Dibble stops them, he can run their licences and find out what their mothers ate last week. Seriously, the technology allows them to detect outstanding warrants for non-traffic offences, whether the person is on probation, if he is who he says he is, and, importantly, if he has a valid driver's licence.

Jamaican drivers oftentimes get fake documents without the necessary competences to back them up. Lewis himself recounted a story of a driver who was stopped and given a literacy sobriety test. Asked to spell 'road', he wrote 'rat', which while a rodent, and sounding similar, is a syllable longer. Thankfully, the policeman is always willing to read him his rights.

A person who makes the decision to break the law, knowing fully what the consequences are, should pay the full penalty. With 85 tickets for traffic violations, it is not a question of what he has done but the kind of character he is. Clearly, he lives outside the law as a matter of course. However, his colleague, who was referred to in a Gleaner story on Thursday, has racked up in excess of 150. More amazingly, he was stopped and then given two more tickets, a pat on his back and a good-luck handshake.

In a modern system, such as our well-equipped neighbours to the north, he would have never been given the opportunity to accumulate even a handful. Once stopped, he would have been discovered to have unpaid tickets, fitted with the appropriate-size bracelets and then chauffeur-driven to the police station.

Lewis' revelation that he doesn't have the legal authority to arrest for the outstanding tickets is startling. When one has a government which: owes billions to the National Transport Cooperative Society arising out of a Privy Council ruling; has a bus system that leaks more money than oil, gas and coolant; and is scrambling to collect additional revenue to balance the Budget and uplift the poor, this cannot continue.

Furthermore, lawlessness in one area is often associated with other types of behaviour. This correlation was not lost on former New York Mayor Rudy Giuliani as he took a zero-tolerance approach to crime in the mid-1990s.

Thus, as he trawled his net for big fish, he picked up all small fry. In doing so, he discovered that many of them were involved with other crimes. This led to a significant decline in crime in the Big Apple.

Even in the absence of other criminal activities, it is a no-brainer that an adult who wilfully, or negligently, causes harm to other persons is culpable in law. When it has to do with children, the blame is even greater. The Child Care and Protection Act is a wonderful piece of legislation because it puts obligations on all adults who know of adult misbehaviour towards children.

There are some serious allegations which abound regarding the operators of public transport units in this country. On a recent television newscast, a female cop was recorded as suggesting that acts of sexual depravity and public lewdness occur routinely on particular minibuses, including some which ply the Portmore corridors. True, it is the home turf of the incarcerated 'World Boss' and purveyor of the 'Ramping Shop'. However, a minibus is no place for anyone to be involved in open acts of romance or debauchery by anyone, much less children.

Furthermore, if read skilfully, the act of driving carelessly and recklessly is another violation of the statute.