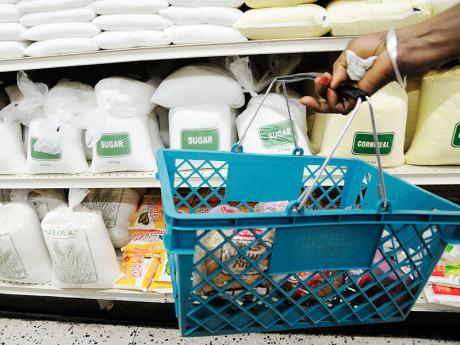 While dark sugar has been spared, granulated sugar will be among many products that lose tax exemption.- File

Today's foremost scourge; the source of much of the world's violence; and the number one reason we don't have world peace is discrimination.

It's amazing how the deadly combo of ignorance and fear of what one doesn't understand can drive otherwise decent, loving people to show so much hatred to others. It's beyond phenomenal how this fear of each other can lead to some of the most ludicrous discriminatory practices.

Recently, I wrote about the fear of homosexuality which has driven our Government to include, in Jamaica's Charter of Fundamental Rights and Freedoms, a command to institutionalise discrimination rather than a human right. Like Michael Jordan, this is unbelievaBULL, but, regrettably, isn't the only clear example of institutional discrimination.

"Sleeping one night when the Father vision I

and said I want you to be another follower of I.

Knot up yu hair and lead a righteous life, son

You will be blessed as a Rastafari."

The Christian lobby fought long and hard for religious freedoms to be included in the charter. But, were they sincere? Is 'religious freedom' just a cloak from under which blind followers can be frightened into line by fear-driven Christian dogma? Or is it freedom to believe in the faith of your choice?

"I had to make a living I had a family.

Food we must eat and clothes we must wear.

Never had a bus fare not a red cent around.

I took a walk downtown.

A job must be found.

No wan' no ol nayga no Rastafari."

Again, Christians (please distinguish them from 'Christianity') keep insisting that Jesus commanded us to be good stewards of our worldly possessions (parable of the 'talents'; Matthew 25:14-30) and have long relied on this as the biblical condemnation of gambling. Frankly, I see the same parable as endorsing risk-taking of all kinds, but that's just me.

Regardless, the concept of a 'steward' is that his possessions are his in law only but, in equity, it's for the betterment of others. For example, Jesus' concept of the 'good steward', if such a concept exists, would include that employers shouldn't discriminate in employment practices.

"So I put me dreadlocks under me tam.

I step inside to ask him why.

You're a fine young man he said I think you will do.

You look ambitious intelligent too.

Take off your hat, have a seat, my son.

I will be back with the application.

So I took off my hat just like him request.

You shoulda see him hiding under the desk.

I let the dreadlocks down 'til it touch de ground

Him run so fast him tumble down.

I represent the Almighty God.

Equality and justice stand for all.

Discrimination against Rasta must fall."

Singer/songwriter Ras Karbi, whose powerful song Discrimination was banned from the airwaves when it was recorded and released in 1975-76, was widely rumoured to be the unacknowledged son of popular realtor Noel Carby. It's a little- known fact that many greats played on that disc, including Peter Tosh (guitar); Tyrone Downie (keyboard) and Leroy 'Horse Mouth' Wallace (drums). It became a smash underground hit and a controversial anthem for all downtrodden victims of inequity.

budgeting on the truth

But, discrimination has become endemic. Apart from religious and employment discrimination, the recent national Budget was an object lesson in how to discriminate. Tax cuts for rich corporations (company profits tax rate down to 25 per cent from 33.33 per cent) came hand in hand with GCT increases on a number of basic foods, including beef patties and condensed milk. God knows what we're going to do if another Hurricane Gilbert hits. We can't afford bully beef. And don't be fooled by the exempting of chicken meat, because 16.5 per cent GCT has been imposed on animal feed.

I see we're promised discretionary tax waivers are a thing of the past. But I bet duty waivers for MPs' new cars remain.

But the most disgraceful action by this Government in the latest Budget is the shameless three-card trick pulled on the country's poor regarding GCT on electricity. The PNP went to the electorate in December 2011 on a manifesto titled 'People Power'. It specifically provided '18 STEPS TO FULL PEOPLE EMPOWERMENT', of which Step 4 (only the negotiation of an IMF agreement; public-sector reform; and the expansion and re-engineering of Petrojam were considered more important) was: "Remove the GCT on electricity charges to ease the burden caused by electricity bills." That clear and unambiguous promise was repeated ad nauseam on the campaign trail by the party leader herself.

On these promises, the PNP won the election. The Government continued to deliberately mislead the people regarding its intention to remove GCT from electricity. As recently as April 11, Energy Minister Phillip Paulwell, when asked about it in Parliament, responded:

"The Government is about to propose a Budget for the new financial year and revenue measures are to be contemplated and decided on at that time. There is a commitment that was given to the people of Jamaica that we intend to fulfil. That process will emerge at the time of the Budget."

Have they no shame? Hardened by political history, we were unsure that the promise would be kept. What nobody expected was that the Government, instead of removing GCT from electricity, would INCREASE the GCT on electricity from 10 to 16.5 per cent. The 'samfie' argument that this affects only businesses and not (many) residential premises is bogus, shameful and deceitful, because businesses will have no option but to pass on these massive cost increases to the poor occupiers of these same residential premises.

And please don't insult us with inane arguments about GCT being an input/output tax with set-offs. Every business in Jamaica is a net GCT payer, and this dishonourable breach of a solemn, national commitment will increase every business' payment.

Jamaican businesses must now defend the poor who have been abandoned, then sacrificed on the altar used to worship foreign creditors. Don't pay this increased GCT. It's the most unjust act perpetrated by any Jamaican Government and must be resisted. Send a monthly payment to JPS for the amount of the light bill only with a covering letter expressly refusing to pay any GCT. Peter Phillips has had the gall to call for a 'New Covenant'. Well, first, businesses should help us enforce the 'Old Covenant'!

"Who neva run; him haffe run.

Him haffe run when Rastaman come."

Then there's the continuing saga of Christopher Henry Gayle and the West Indies Cricket Board (WICB). I had long advised Gayle to step down off his high horse and seek a resolution since he held the blade and his employers the handle. Apparently, he did so. With the quiet involvement of three Caribbean prime ministers, past and present, he sat down with the WICB and hammered out a meet-me-in-the-middle resolution which included his being able to complete the Indian Premier League season while offering to sacrifice his Somerset contract. Yet, an absurd series of subsequent events and email exchanges still find him in limbo until "certain residual issues" are resolved.

My usually reliable sources tell me that Chris asked for a commitment that he would be selected for the English tour one-day internationals before giving up his Somerset contract, since giving up both wouldn't make any sense. According to my sources, the board first used the opportunity to try to pressure Gayle to cause a multimillion-dollar lawsuit against the WICB by the West Indies Players' Association and Gayle to be withdrawn despite the fact that the lawsuit is about the late/non-issuance of 'no objection' certificates and has nothing to do with the matters surrounding Gayle's non-selection or the negotiated resolution.

When that didn't spin, the board sent him to meet with the selectors. But the selectors said he must be first cleared by the board. Then the board said it has nothing to do with selection. But ethereal 'residual issues' must be resolved.

So Chris was forced by what seemed delaying and obfuscatory tactics to surrender his Somerset contract without any idea if he'd ever be selected.

Then, despite Clyde Butts telling Chris when he met the selectors "that once he (Gayle) was available, he would be considered for selection once the board gave the necessary clearance", and subsequently by the WICB in writing that the "board has never and will not now start interfering with the decision of the selectors", Chris Gayle somehow finds himself still in the doghouse and must meet with the WICB today to discuss what only God and the WICB know. No agenda has been distributed.

Contrast this with the WICB's treatment of one Gregory Shillingford, who replaced Steve Camacho as CEO in 2000 but was fired in 2002 for non-performance. Apparently, as reported on an unauthorised blog named wicbexpose.com, Shillingford negotiated and received a large ex gratia settlement in exchange for his promise not to sue for wrongful dismissal, but sued anyway. The lawsuit was dismissed and he was ordered to pay US$15,000 in legal costs. Shillingford was subsequently employed by KFC in Antigua, but also lost that job.

While this debt was still owing, the otherwise unemployed Shillingford was accepted as a WICB director and appointed chairman of a committee to rewrite the rules on ethics. Mr Shillingford, a Dominican residing in Antigua, who was president of the Leeward Islands Cricket Association and a WICB Executive Committee member when the fiasco took place at the Sir Vivian Richards Stadium in Antigua very near to his home, was subsequently retained as a paid consultant to the WICB, responsible for grounds and pitches for all matches in the Caribbean. A job for a friend to help him pay his legal costs?

Chris Gayle should be so lucky.