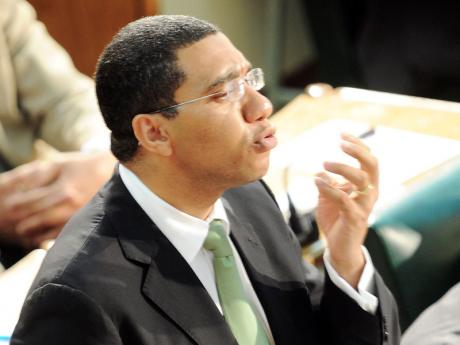 Andrew Holness, the opposition leader, argued in his Budget Debate presentationlast Thursday that the tax package would be poisonous to the economy. - Norman Grindley/Chief Photography

Minister of Finance and Planning Dr Peter Phillips has correctly identified the trust deficit as the most profound problem facing Jamaica. He was quoted in a Gleaner Editors' Forum as saying, "No doubt there's a great trust deficit between the population and the political Establishment, for understandable reasons. We have been in the circumstance of no progress and shattered dreams for so long that many people have become cynical, and that is understandable also."

He said further: "The real challenge of our politics is to be able to debate more of the things that are of national interest and subordinate the partisan competition, which just allows everybody to take the easy populist route."

Populism is a huge part of the trust deficit, but it is more than that. It seems to me that two types of issues that have come to the fore in the 2012-13 Budget Debate have laid bare reasons for this trust deficit. One is a failure of members of the political Establishment to hold themselves accountable for the actions they have taken. At this stage, that applies to Audley Shaw more than it does to Dr Phillips. A discussion of this, however, would be of little relevance at this time.

I prefer to concentrate on the second reason for the trust deficit, which I think arises from the complexity of the choices facing a political administration at a given time and a failure on the part of the leadership to be single-minded and thoroughgoing in the action taken. In this respect, my sympathies lie with Dr Phillips in his first Budget Debate as minister of finance. He has been dealt a cruel hand. There were no easy choices for Dr Philip and no where to hide in the present fiscal circumstances the country faces.

Yet, on the other hand, Dr Phillips, as he has himself acknowledged, had the wicket laid for him by the work of a number of civic and private-sector groups, most notably of which has been the contribution made by the Private Sector Working Group (PSWG) on tax reform. Dr Phillips ought to have been assisted by the options presented by the PSWG submissions, for example, in his attempt to broaden the GCT net to include, among other things, basic food items, and eliminate exemptions.

It seems to me that, even though the wicket was rolled for Dr Phillips, he did not make use of the good work in public education and in the softening of resistance. The PSWG's submission for the elimination of exempt items was governed by some broad principles and objectives. These included broadening of the tax net to include all players and simplifying the GCT system, placing social protection of the vulnerable on the expense side of the Budget rather than on the revenue side, and increasing the total revenue intake.

Especially because their proposal to broaden the tax net by removing the exempt items was accompanied by a meaningful lowering of the GCT rate and a reduction of the rate of personal income tax for persons earning less than J$1.2 million, the measures proposed by the PSWG were quite palatable. The route chosen by Dr Phillips has managed to earn for himself all enemies and very few, if any, friends.

More profoundly, it will not achieve the reform objectives of broadening, simplifying and increasing tax revenue, while protecting the vulnerable. Thankfully, the debate is not yet over, and Dr Phillips, by the time he speaks on Wednesday to close the debate, can make some important adjustments that will achieve the important objectives.

He should consider the following:

I propose that all basic foods and previously exempt items, especially those defined as the ones on which the most vulnerable groups in the society spend the majority their income, be brought into the GCT net, but at a differential GCT rate of five per cent or some notional figure. (Tourism currently pays 10 per cent; telephone 25 per cent; and all others 16.5 per cent). So all items will attract GCT and all players will pay GCT.

Special chicken rate
Let me use chicken to illustrate what could happen. The measures proposed by Dr Phillips impose a rate of GCT of 16.5 per cent on fish, beef and pork. Chicken is exempted. Despite this special exemption, the poultry subsector has already indicated that chicken prices will increase. The reason for this is that all animal feed now attracts GCT at a rate of 16.5 per cent.

Because chicken is exempt from GCT, poultry producers do not have the option of recovering the GCT they have paid on animal feed, electricity, etc., when they make their GCT returns. In fact, they will not make a GCT return, since they do not charge GCT on their product. The GCT they have paid, therefore, becomes part of the cost of producing the chicken and thus inflationary.

If chicken attracted GCT of even a rate of five per cent, the producers could 'expense out' the GCT they pay on animal feeds and thereby reduce the price of chicken to the consumer. The same would apply to all basic items. GCT is an input-output tax. It is not meant to be part of the productive or basic cost of the goods. (Part of the trust deficit is that no one seriously believes that the chicken producers would pass on the savings to the consumers.) If, however, the five per cent GCT would be neutralised by the ability to recover GCT paid on all inputs, perhaps Dr Phillips could consider a further trade-off by further lowering the GCT rate to 15 per cent.
Cash transfers for poor
If this approach were adopted by the finance minister, he could follow it up with two important undertakings to be realised in the near term. The first is some kind of cash-transfer mechanism to relieve the pressure on the vulnerable. Even if the cost of basic food rises by only five per cent - although these items do not need to rise in price by that rate - it is already beyond the means of the vulnerable.

It is my hope that when Prime Minister Portia Simpson Miller speaks on Tuesday, she will articulate a framework for the greater social protection of the vulnerable, including by an expansion of PATH. The second undertaking is that Dr Phillips should pledge to seek, in the near term, to unify the GCT rate. Over time, the rate of 16.5 per cent should be systematically lowered and the rate on basic food items should increase once the social protection and cash-transfer mechanisms are in place.

In order for trust to increase, the focus and purpose of fiscal action must be clear. The measures used in the respects outlined above are sending a confusing signal. It is like being barely pregnant.

The Rev Garnett Roper, PhD, is president of the Jamaica Theological Seminary and a member of the Private Sector Working Group.