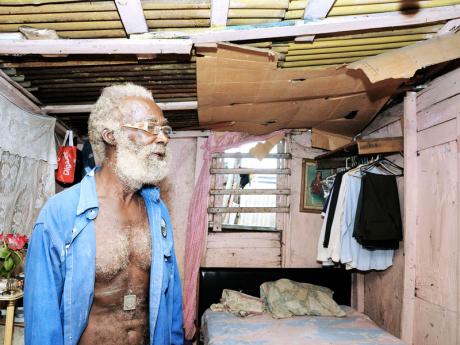 Benjamin Morris, a 65-year-old resident of Majesty Gardens off Spanish Town Road, shows a Sunday Gleaner news team the poor condition of his home during a recent visit to the depressed community. The piece of cardboard in the ceiling is used to insulate the home from the scorching heat beating down on his zinc roof.- Gladstone Taylor/Photographer

Mama Joyce, at 73, remembers when things were better in Majesty Gardens, a section of Prime Minister Portia Simpson Miller's South West St Andrew constituency, which was only a 'Pen' when Mama Joyce started living in that community in 1949.

Majesty Pen turned Majesty Gardens, like several other pens around the downtown core of the city which were renamed gardens or towns, has seen deterioration rather than improvement over the lifetime of Cynthia Bryan, better known as Mama Joyce, and certainly over the 36-year stewardship of Mama P as MP.

Meanwhile, just a mile or so east along Spanish Town Road, Back-o-Wall, once "the rectum of the city", in Edward Seaga's excremental metaphor, was converted with state money into Tivoli Gardens with decent housing, a high school, health centre and community centre offering cradle-to-grave 'development'. But as rectal as Back-o-Wall was, a home for hustlers and a lair for petty thieves operating in the market strip, that shanty town didn't have a 'jail' operated by a don in which, according to a former general in the system testifying against the extradited last don, dissidents sentenced to death could be executed by chainsaw, hatchet or gun.

As the Inner-City Housing Project Unit of the NHT moved into Majesty Gardens, the home of the Rat Bat gang, with $300 million of NHT contributors' money to construct 96 houses among 600 families, media in tow have provided us with a ringside seat of the deplorable conditions in the rebranded Pen.

In the Gleaner report filed by Tyrone Reid last Sunday, 65-year-old Benjamin 'Australia' Morris lamented, "You don't see a dog life we living down here? You don't see a swamp we live in?"

Australia lives in a broken-down captured house that he and his children had taken over after the owners fled from the violence engulfing the community. A common story among the pens turned gardens and towns around the downtown core of the city.

Just over a week before Australia's lament, Kelcy-Ann Wynter had wept uncontrollably as she poured her and her community's woes into the comforting bosom of Mama P there to launch a community renewal programme.

The 32-year-old mother of two has become so weary of her life-long ordeal that, upon seeing her member of parliament, Prime Minister Portia Simpson Miller, she burst into tears. She said no one should live in her community.

Where the absence of basic amenities is not the subject of residents' gloom, the wanton gang warfare in the area - which has, on occasion, accounted for the largest number of deaths in the St Andrew South Police Division, suffices.

Majesty Gardens has been ranked among Jamaica's poorest communities. Comprising mostly board dwellings, its squalid conditions rob residents of their dignity, forcing the more impoverished to use nearby gullies, filled with debris and flies, as makeshift bathrooms.

Two of the most destructive problems facing these ravaged inner-city communities struggling with reverse development were raised in the tear-drenched encounter between Mama P and Kelcy-Ann Wynter. Ms Wynter herself raised one and the MP/prime minister the other. Ms Wynter pointed out the division of the community, "up the top is Majesty Gardens and down the bottom is 'Back To'. I am from 'Back To'." These divisions have led to countless senseless tribal conflicts taking lives, destroying property, and reversing development.

The MP/PM pointed out that construction on the housing scheme was stopped when her People's National Party (PNP) lost the 2007 general election. "Over four years ago we started the housing scheme, and four years ago it came to a stop. Today, I am here to tell you that we signed a contract for the completion of those houses, and after the completion, the building of the phase-two houses," said Miller to loud applause at the community meeting. This other dimension of political tribalism, of starving opponents and feeding supporters has, more than anything, contributed to the construction of the garrisons with their vast destructive capabilities.

Entering the community with the ICHP, Gleaner reporter Tyrone Reid says, "A foul odour had a strong grip on some sections of the community, and it was clear why Kelcy-Ann Wynter was moved to tears as she explained her depressing situation to her member of parliament, Prime Minister Portia Simpson Miller, just over one week ago. Members of our news team had to watch their every step as they walked through one section of the community. It was clear that Majesty Gardens is desperately in need of garbage receptacles, as rubbish is being dumped everywhere.

"The living situation gets worse as you go deeper into the belly of the community. Adults and children were seen bathing in the open.

The community is plagued with improper and inadequate sewage facilities and a plethora of other social and structural ills. Wild pigs and stray dogs were also seen in the community, relying on the steady flow of garbage for their food."

Matriarch Mama Joyce was wise and solid in her analysis of the roots of some of the problems.

"It is very bad. The zinc-fence mentality ... . We would like to live up. It name a Garden, but not looking like one now," lamented the 73-year-old.

She believes the moral fibre of the community has disintegrated in step with its physical infrastructure. "The discipline has fallen ... . We woulda like fi see yah so nice."

To underscore the problem of behaviour and moral readiness for development, even while the prime minister was in the community calling for unity and the removal of violence, and despite the presence of a heavy security detail, a fight erupted between two young men, who are relatives, who had to be restrained and removed by the police.

Someone has just sent me a news report from the IDB: 'Civic culture is key to reduce violence, study finds', which is a news story on an IDB study, 'Antipodes of Violence'. The story said: "IDB-sponsored study explores how changes in civic culture are needed to achieve long-term success in mitigating violence. Any successful strategy to prevent violence should include measures to recognise and change behaviours prompted by beliefs, emotions and cultural factors, according to a new study sponsored by the IDB.

"It is not enough to increase police capacity, reduce socio-economic inequalities or amend laws to achieve deep changes in the safety of Latin American cities," the study says. 'Antipodes of Violence' examines civic culture as a way to transform harmful behaviours that affect the lives and safety of other citizens, to help cut the high murder rates and personal injuries in Latin America and the Caribbean.

"According to the study, culture may help explain, interpret and regulate the behaviours of individuals. In the study, culture is defined as the universe of social norms, attitudes, beliefs and habits shared by individuals in a social group, in which the goal is living in a community without violence."

Tivoli Gardens offered houses and community facilities which Majesty Gardens can only dream of. But these were not sufficient to prevent a criminal 'system' from taking root and flourishing there and coercively dragging in all and sundry.

The cooperating witnesses in the Christopher Coke sentencing hearing have given riveting testimonies on the growth and entrenchment of the 'system', its function as an alternative government which managed to achieve a low crime rate within its zone of control, and of the atrocities it carried out to enforce its will and to make its revenue.

The witnesses told the US court: "The housing in which most residents of Tivoli Gardens live was built by government, when the Jamaican Labour Party (JLP) was in power. The vast majority of these residents do not pay rent, nor do they pay for utilities such as electricity and water.

"As the area leader, Dudus, like his father and brother, provided certain services to the community. For example, he assigned paid work to members of the community arising out of Government contracts that he obtained - such as contracts to clean streets, fix roads or engage in other construction projects. For these projects, Dudus would deduct, from the salaries paid, a portion of funds as a contribution to the 'system' - essentially a required payment to the organisation which was used to purchase guns and ammunition and also to provide assistance to the members of the community.

"During the time that Dudus was in control of Tivoli Gardens, Dudus, like Jim Brown, imposed a strict code of conduct upon members of the Tivoli Gardens and surrounding areas such as Denham Town [they] did not report crimes or acts of violence to the Jamaican police, known as the Jamaica Constabulary Force. Instead, residents of Tivoli Gardens reported such incidents to Dudus directly, in his office."

We are now wrestling with a debt-servicing budget with little by way of straight development commitment. But, clearly, a programme of rehabilitating and transforming communities like Majesty Gardens and Tivoli Gardens, down to the core of civic culture, has to be part of any viable development plan and its break out into annual budgets.

Martin Henry is a communication specialist. Email feedback to columns@gleanerjm.com and ianboyne1@yahoo.com.