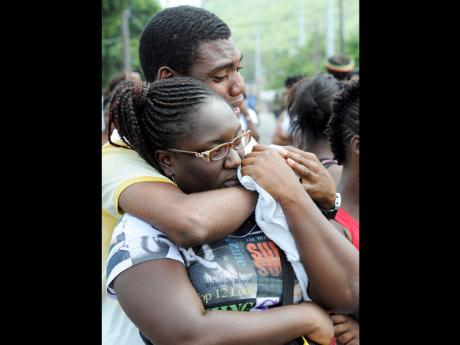 Vanesa Taylor (foreground), administrator at the Mountain View Police Youth Club, and Mario Williams, public relations officer at the club, comforts each other after hearing that a club member had been fatally shot by the police.- Norman Grindley/Chief Photographer 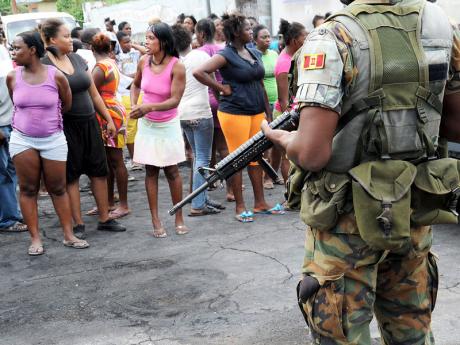 Traffic had to be diverted from a section of Mountain View Avenue in St Andrew yesterday morning as angry residents staged a fiery protest.

"No car nah pass ya so, unu try know dat. So unnu stop right weh unnu deh," shouted one resident as the protesters demanded justice for 21-year-old Kavorn Shue who had been fatally shot by the police hours earlier.

The protesters claimed that Shue, the sports coordinator for the Mountain View Police Youth Club, had been killed in cold blood by the cops.

According to the residents, at about 4 a.m., a police team entered Jarrett Lane and kicked open the door to Shue's house and immediately opened fire, hitting him several times.

"A policeman tell me say them have information that there was a wanted man in there and them did come for him, but it look like them go the wrong house," said one resident.

Mario Williams, public relations officer for the Mountain View Police Youth Club, was in tears as he tried to come to grips with the death of his friend and fellow club member.

"It's really devastating; he had a strong bond with the club, he was passionate about it. There is never a dull moment when you are around him. Just yesterday I called him to remind him of the speech he had for our elections, and to know that dem kill him. Trust mi, mi really tear up right now," Williams said as he tried to hold back the tears.

Councillor for the area, Carl Little, told The Sunday Gleaner that while he was uncertain as to the sequence of events, the fatal shooting left him saddened and he will ensure that there is full investigation into the matter.

"I can only go with what I heard, and from what I'm hearing it is alleged that the police killed a young man who was a role model in the community. As you can see, the residents are very angry."

The protesters were firm in their stance. "Wi nah stop until wi get justice. I want to make it clear that we are going full hundred and wi calling on the security minister and the commissioner to review the management of the police force for the Mountain View area because ever since the new management take over, a pure foolishness a gwan," declared Milton Tomlinson, president of the Mountain View Development Council.

"I want to make it clear that we are not against policemen doing their job, and I respect the police to the fullest, but I can't understand how dem fi kill the youth; di youth not even smoke, him nuh drink, he's one of the few young men in the community weh yuh can look up to and was a dedicated member of the police youth club," lamented Tomlinson.

Up to late yesterday, there was no official word from the police on the shooting, with senior officers directing the media to Independent Commission of Investigations (INDECOM).

However, INDECOM officials said while its investigators who visited the area initially had to leave because of gunfire, a probe is now under way.