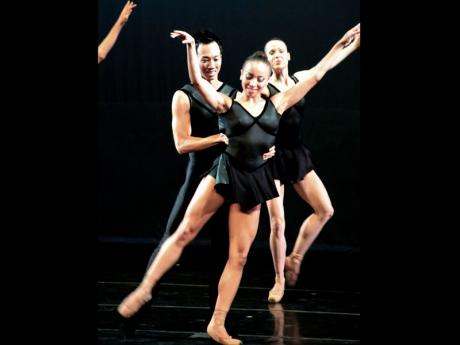 An enthralling routine by the Harlem Dance Ensemble. 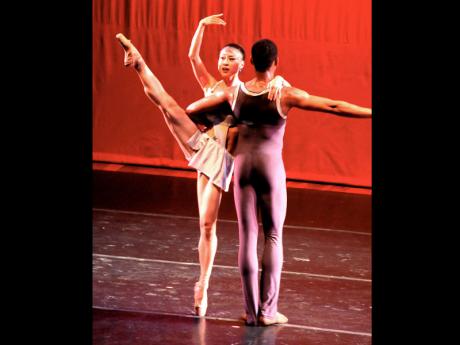 The buzz is continuing over the recent transformation of the grounds of the Little Theatre into a red-carpet affair.

Red carpet was placed along the walkway, and on the floor of the foyer.

Against the backdrop, guests who arrived for the pre-show cocktail, mingled in an atmosphere coated by a strong aroma of food and clinking sounds of ice against glasses. They were attired in various interpretations of the dress code 'red-carpet chic' and all were greeted on arrival by United States Ambassador to Jamaica Pamela Bridgewater.

The occasion was a special performance of The Dance Theatre of Harlem Ensemble.

It was organised by the United States Embassy in Kingston, under the banner of 'Celebrating the Ties That Bind: 50 Years of Friendship' as part of Jamaica's 50th anniversary celebration.

Sometime after waiters wearing black pants, white shirts under black vests, and white hats decorated by blue and red stripes completed their serving, the guests were ushered to the auditorium.

On the red carpet, they walked into the theatre, a picture of Oscar night. Each guest was presented with a programme of the event.

Inside the theatre, Ambassador Bridgewater told her guests that the first time she saw The Dance Theatre of Harlem Ensemble performed was in South Africa.

She reminded the guests that the first performance by the dance ensemble in Jamaica was at the Ward Theatre in 1972.

The show was then handed over to members of The Dance Theatre of Harlem Ensemble. They thrilled the large audience with their five dances performed in a two-segment programme.

During intermission, Ambassador Bridgewater explained her reason for having a dance company as part of the embassy's celebration of Jamaica's 50th anniversary.

"Dance is a universal language. And dance is a part of Jamaica's culture. And the Dance Theatre of Harlem has a wonderful dance expression of the United States. And it is a very important medium. Dance is in our culture and our history, and it is a great way to show how countries are continually bound together," she said.