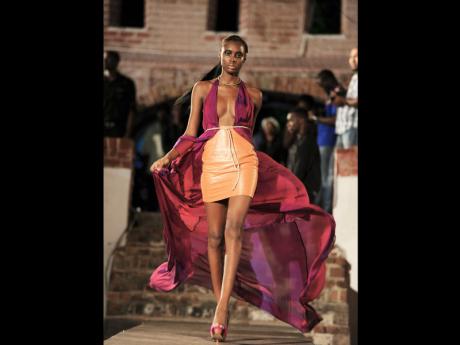 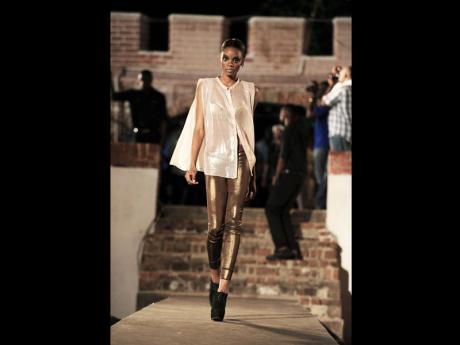 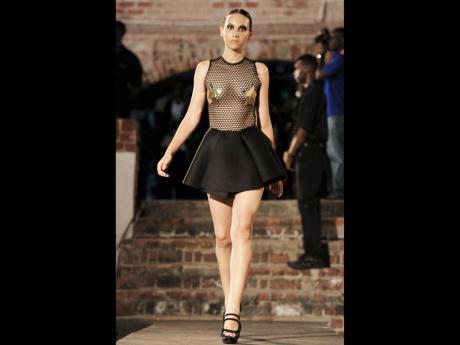 A short number from Laquan Smith. 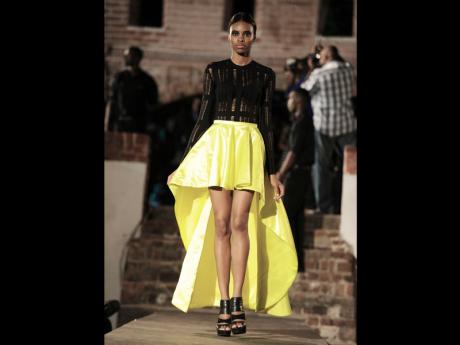 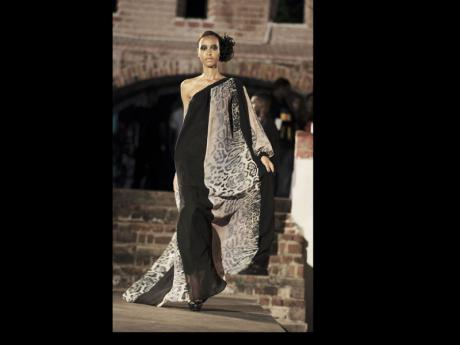 A dramatic presentation of an all-white collection brought the closing curtains down on the International Mecca of Style night at Fort Charles in Port Royal. Kevin O' Brian, also known as KOB, brought a totally different element to the catwalk as he showcased a line that paid homage to Jamaica's 50th year of Independence.

The collection requested by Saint International CEO, Deiwght Peters was simply breathtaking! Headpieces and facial masks add a dramatic flair to the pieces. Prior to this 'winter white' showcase, the catwalk saw designers from all over the world displaying a total of 17 collections for the night.

Jamaican designer Yola Gray kicked off the night's proceedings with her collection, which the audience enjoyed. The pieces were mostly built around reflecting a Caribbean and Jamaican flavour made from fabric that she purchased in Bangladesh.

Andre Shirley, another Jamaican, stuck to the summer trends showcasing skirts, shorts in bold prints and bright colours that went over well with the attentive audience. The University of Technology's Fashion Designing Programme showcased a mini-collection from three of their students from the region along with their facilitator.

Cossil Ross, originally from Grenada, presented a collection that was bold in colours and prints. In the same breath, the other two students - Juliet Harris from Jamaica and Elsian from the Turks and Caicos Islands - also presented their mini-collections. Harris' collection had more of an ethereal feel with edgy cuts while Elsian had very tasteful swimwear that was a bit revealing but still left a lot to the imagination.

Jamaican-born fashion designer Courtney Washington's collection had a number of classic black and white pieces, as well as a number of pieces that reflected Jamaica 50 pride infusing the black green and gold of the Jamaican flag. Each piece was cohesive, directional and flattering to each model on the runway making his collection one of the most wearable from all the collections showcased.

For the Spring/Summer 2012 collection, local designer Neahlis did not fail to deliver. Her collection of tropical dresses were bold, distinctive, colourful and free-flowing.

The final segment of the night's show turned out to be the best. This segmented represented the saying "save the best for last". New York-based designer Laquan Smith, who has designed for Hollywood stars such as Alicia Keys, showcased a collection that was inspiring. Smith atristically infused high fashion with some futuristic elements. His use of metallics and mesh material with pops of lime green also added vibrancy to the runway.

Local young designer and fashion entrepreneur Franz Christie held his own in a segment that featured some of the best designers from all over the world. This young designer commanded the audience's attention with his designs that had a mixture of varying bright colours. He also managed to use infuse metallics into his already vibrant collection that made it even more trendy.

The penultimate collection by KOB was glamorous, refreshing creative, dramatic and simply beautiful against the rustic look of Fort Charles. It was the only collection to receive a standing ovation from members of the audience.