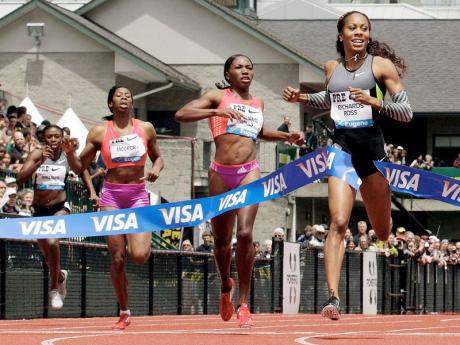 Ashmeade, a former St Jago High star, clocked a personal best 9.93 seconds for second in the men's 100 metres, won in 9.90 by American Justin Gatlin. MVP's Nesta Carter equalled his season best 10.05 in placing sixth as Americans bagged four of the top-five spots. In a close finish for the minor places, Trell Kimmons (10.04) was third, Walter Dix, also 10.04, was fourth and Darvis Patton took fifth in 10.05.

Former world-leader Novlene Williams-Mills had to settle for third in the women's 400 metres as Jamaica-born Sanya Richards-Ross posted a new world-best 49.39 to win the event. Botswana's world champion Amantle Montsho was second in a season best 49.62 while Williams-Mills also lowered her season-best to 49.78 for third. There was also a season-best for Shericka Williams, 51.24, in sixth place.

American Allyson Felix was hard to miss in her aerodynamic black bodysuit with neon yellow patches on each leg in the women's 200 metres and she streaked away from a field which included Jamaica's Anneisha McLaughlin and her compatriot Carmelita Jeter to win the event in 22.23.

"I feel like I'm in a good place right now," Felix said, with the Olympics set to start in just under two months. "I tried to focus and power in. But they told me it didn't look like I pushed very hard at the end."

Actually, she didn't appear to have to work very hard at all.

Felix risked a quick glance back after rounding the bend, just a tiny peek to size up who was about to make a move.

No one was even close.

"I expected it maybe to be a little tighter at the end," Felix said, smiling.

In the men's 200 metres, American Wallace Spearmon drew clear late to clock 20.27. Churandy Martina of the Netherlands Antilles was second in 20.49 while Jamaica's Marvin Anderson crossed the line third in 20.74 ahead of Trinidad and Tobago's Rondell Sorrillo, 20.81.

Meanwhile, China's Liu Xiang won the men's 110m hurdles in 12.87 seconds. That time would've tied the world record, but it was wind-aided by a slight margin.

Teenager Kirani James of Grenada left the blocks a split second too early and was disqualified in the men's 400 metres. But he protested and was allowed to run while the matter was sorted out. With James disqualified, the one-lap race was won by American Lashawn Merritt in 44.91 from Bahamas' Chris Brown, 45.24.

As for the false start, James said he thought the runners may have been held in the blocks a little too long.

"It happens," James said. "I'd rather it happen here than at the big one."