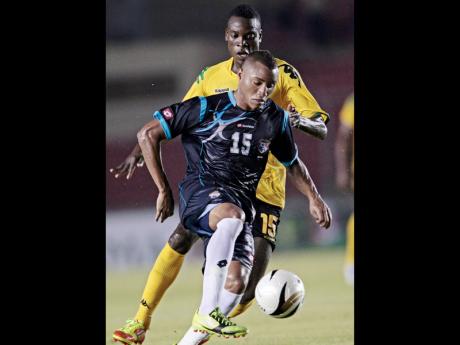 Coach Theodore Whitmore urged local football fans not to judge his team on warm-up games after the Reggae Boyz were beaten 2-1 by Panama Friday night in Panama City.

The Boyz were losing to the Panamanians for the second time in six days, following a 1-0 loss at the National Stadium on Sunday, May 27.

"I don't want them to judge us on practice games. The big thing is the World Cup qualification come June 8, and we have been using the opportunity to look at a number of things, including extended playing time for a few players who have been out of competition, because we can afford to get it wrong now but cannot afford that on June 8," Whitmore said.

The Reggae Boyz played their final warm-up game ahead of their opening Brazil 2014 World Cup qualifier on Friday against Guatemala. The Guatemalans had the ideal build-up, a 1-0 win over Costa Rica 1-0 in another international friendly in preparation for their game against Jamaica.

"I think it was a better performance than the last game. We made a couple of changes to the line-up, likewise Panama. Panama made eight changes but I think the first half was a gutsy performance from us. We were organised, kept our shape, gave up a goal against the run of play and then got back in the game."

Jamaica went behind in the 34th minute when the defence was caught out by a through pass which was scored by Blas Perez.

The Boyz responded soon after as the outstanding Austin drove through the midfield and passed to Ricardo Fuller on the right of the 18-yard box. Fuller attempted to beat goalkeeper Jaime Pinedo at his near post but fired his shot on the wrong side of the post with Ryan Johnson and Dane Richards waiting in front of goal.

Richards was to benefit from a Panamanian defensive mix up to head past Pinedo and bring the scores level in the 43rd minute to go into half-time on level terms.

The second half saw both coaches ringing the changes and Jamaica continued to give as much as they were getting as Austin, Je-Vaughn Watson and Rohan Reid worked hard in midfield, while Richards and occasionally Phillips troubled he opposition with their pace.

As time wore on, the Reggae Boyz gradually lost intensity and gave up another goal in the 76th. Midfielder Armando Cooper split the defence for substitute Luis Renteria to outpace Claude Davis and Damion Stewart to score.