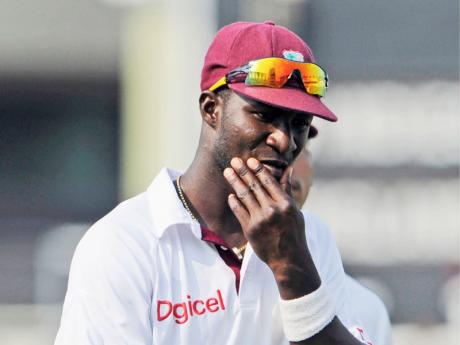 ON THE BOUNDARY Tony Becca

When the Test series between the West Indies and England got under way on May 17, I had thought, or rather, I had hoped that at this time, I would have been showering praises on the West Indies.

Unfortunately, however, the series, for all intents and purposes, is now over, and it is over in England's favour.

With one match to go, it is two-nil for England, who won the first Test in the cold at Lord's by five wickets after England had won the toss and sent the Windies to bat, and the second Test in bright sunshine at Trent Bridge by nine wickets after the Windies had won the toss and batted first, the first finishing in five days, the second in four days.

It was once again disappointing as the West Indies continue to lose with a few of their better players absent, two players given permission to miss the tour, apart from those being "disciplined" by the West Indies Cricket Board, a few of the better players not selected, and as a result of all those things the top of the batting was an embarrassment and the bowling was limited to two good bowlers.

It was disappointing also because the West Indies batted into the second day of the second Test while scoring 370 and yet lost the Test match by nine wickets long before tea on the fourth day and because, listening to the CEO, the coach, and the captain, hearing their excuses and noting their ability to find something nice to say after every defeat while patting some players on the back for average performances, they appear to be fostering mediocrity.

Although the overall result was a disappointment, the action over the five days, or some of the days, to an extent, was refreshing, even though the run rate emphasised the difference in the quality of the teams.

In days gone by, West Indies were not only the winners: they were also the entertainers.

What was promising about the West Indies' performance, however, is that although they lost, there were times when they fought admirably, when they gave as much as they got, and when their best players showed that they are West Indians, that they are as good as, or better, than many others around the world.

In the first Test at Lord's, England were 244 for two after dismissing the West Indies for 243 and to everyone's surprise, they were dismissed for 398. And in the second innings, after trailing England by 155 runs on first innings, the West Indies were 65 for four and apparently dead and buried before Shivnarine Chanderpaul, 87 not out in the first innings, and Marlon Samuels scored 91 and 86 respectively, and left England 190 to win.

England won but not before the scoreboard read one for one, 10 for two, 29 for three, and four for 57 with fast bowler Kemar Roach picking up three wickets with some fiery bowling.

At Trent Bridge, the West Indies were 63 for four and 136 for six before Samuels and captain Darren Sammy rescued them with 117 and 106 respectively, in a partnership of 210.

England then batted confidently to reach 300 for three before they struggled to 363 for seven on their way to 428, and in their most embarrassing performance of the summer to date, the West Indies lost six wickets for 61 runs at the start of their second innings.

The West Indies' collapse brought back memories of previous performances.

Even then, Samuels, with 76 not out, held up England on the fourth day as the final four wickets carried the West Indies fight until after lunch.

Chanderpaul continued to bat well but the star performers for the West Indies have been Samuels and Sammy.

Samuels deserves high praise for his consistency, for proving that he can bat, and bat very well, and Sammy for his self-control, his stroke selection, his wonderful strokes, and for his scoring rate in stroking his maiden Test century.

Samuels seems to have finally decided to deliver the kind of scores his ability promised from the time he was a youngster, and Sammy, although he still has to prove that he has a place in the team, went a far way in doing so.

Sammy faced 156 deliveries, and it was great to see his control while batting for 261 minutes, hitting one six, and stroking and hitting 17 fours.

It was truly a captain's innings, but although it may lengthen his time, his batting average of 21.51, his normal way of batting, and his bowling do not strength his cause, not in Test cricket, and not in a team with so many weaknesses.

The West Indies have already lost the series but in many ways, they played well. They played with a fighting spirit, they fought every inch of the way to the extent that even the tail-end batsmen tried to bat long, and they fielded well, sometimes brilliantly.

Thanks to coach Ottis Gibson for his insistence on discipline and for the resurrection of the fighting spirit. Who to tell, with this fighting spirit, the sky is the limit.

Who to tell also, although they were there before and although it really made no difference, the addition of a few good players like batsmen Christopher Gayle and Ramnaresh Sarwan of the old brigade might make a difference if they can fit into the scheme of things, and so too the inclusion of spin bowlers like Devendra Bishoo and Sunil Narine, who will mesmerise batsmen, a wicketkeeper, who can make a few runs, and one or two more fast bowlers, who will make batsmen tremble in their boots like they did in the good old days.