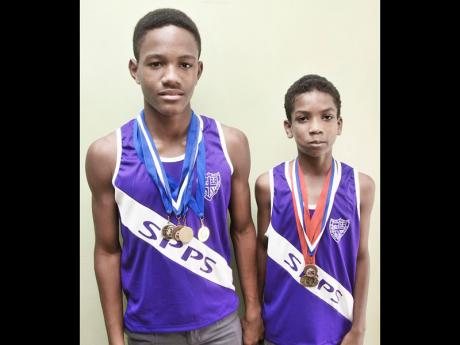 Hydel produced a number of sparkling performances at the National Stadium yesterday to win the three-day JISA/CapriSun Prep Schools Track and Field Championships for a seventh consecutive year.

The Ferry-based Hydel ended the championships with a massive 326 points, with Vaz well back in second on 140.

"I am elated because we never thought the margin of victory would have been so large," said Bennett. "From a one-point victory last year to over hundred points this year just goes to show the amount of work that we have put in our programme," Bennett added.

Chadon Davis of Sts Peter and Paul was the star athlete of the championships and voted the overall champion boy of the meet. After winning the high jump on Thursday's opening day, the 12-year-old Davis blew away the field to win the 400m in 55.90 ahead of Hydel's pair of Jaise Foster (56.14) and Shaquan Allen (58.97).

A few minutes later, Davis brought the packed grandstand crowd to their feet when he outsprinted Hydel's Dejour Russell to the finish line to win his third gold medal of the championships in winning the Class One 200m in 25.08. Russell took home silver in 25.49 ahead of his teammate Jaise Foster (25.95).

"I am feeling very elated," said Davis with a broad smile. "This is major achievement for me to win three gold medals at prep champs in my final year," said the 12-year-old who revealed that he would like to attend Wolmer's Boys.