Commanding Chief too classy for rivals 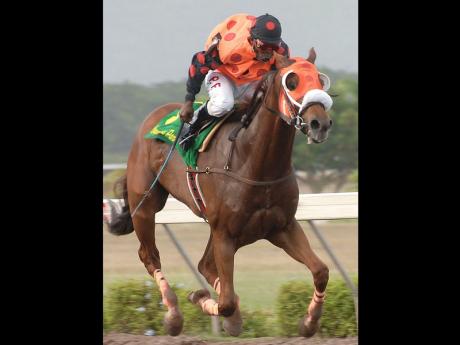 COMMANDING CHIEF, one of the top horses in the country, outclassed rivals to win the 17th running of the Thoroughbred Racing Hall of Fame Stakes Trophy open allowance feature at Caymanas Park yesterday to be unbeaten in two starts this season.

Toting topweight of 57.0kg with Paul 'Country' Francis again in the saddle, the classy four-year-old chestnut gelding by War Marshall out of She Knows Beau made virtually all to win by 11/2 lengths from the 17-1 shots SWEET TRAIL and PALACE GOLD, both of whom chased the winner in a field of nine.

Owned by Doks Stables and trained by Everal C. Francis, COMMANDING CHIEF (1-9 favourite) has now won seven races from only 11 starts, including last year's St Leger. He was second to MARK MY WORD in last November's Superstakes and failed by a short head to catch champion sprinter and subsequent 'Horse of the Year' SAINT CECELIA in the CTL Gold Gold, both grade one races.

As a result of yesterday's win, COMMANDING CHIEF, who was bred by Paul Chen, has increased his lifetime earnings to $6.3 million.

"Right now, we are happy to know he is fit and well. We are just taking it one day at a time, and while the competition will get stiffer when he returns to grade one company, will hold his own against the very best," said Wellington. The Hall of Fame Trophy was presented to his daughter Sidoney Wellington by the newly appointed chairman of the Jamaica Racing Commission, Linton Walters.