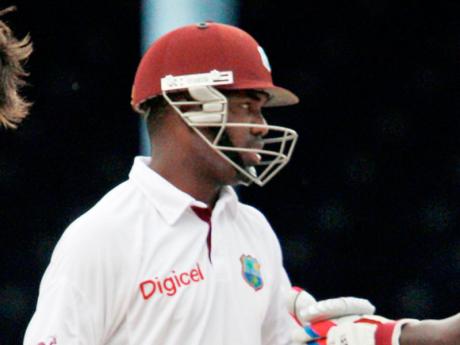 Bravo stroked a typically flashy 66 while Barath finished unbeaten on 53, two innings that helped guide the tourists to 150 for three at Grace Road.

Rookie left-hander Assad Fudadin was with Barath at the close on seven, in his first knock of the tour.

Winning the toss and batting after rain delayed the start by half-hour, West Indies slipped to 25 for two after Malik removed both Kieran Powell and Edwards in the space of four balls in the ninth over of the morning.

The left-handed Powell edged behind to wicketkeeper Ned Eckersley off the first ball of Malik's fifth over for nine before Edwards, leading the side in the absence of regular captain Darren Sammy, was plumb lbw to a full-length delivery, three balls later.

For the right-handed Edwards, it was his fourth duck in six innings on tour, and has now scored 20 runs from eight outings since arriving in England.

Bravo and Barath then combined in a free-scoring 111-run, third wicket partnership to steer West Indies out of trouble.

Striking the ball sweetly and cleanly, Bravo counted 10 fours and a six - a thunderous blow off left-arm spinner James Sykes that raised the hundred partnership - in an innings that lasted just 97 balls and spanned 144 minutes.

Barath, meanwhile, showed his usual penchant for the off side in stroking four fours off 151 balls in three hours and 38 minutes at the crease.

Rain interrupted play in the afternoon session for over an hour but West Indies were unfazed on resumption, and Bravo soon raised his third half-century of the tour.

The stylish 23-year-old eventually fell when he missed a booming drive at left-arm seamer Rob Taylor and was bowled at 136 for three.

Leicestershire were without out-of-favour West Indies batsman Ramnaresh Sarwan who was rested for the fixture.