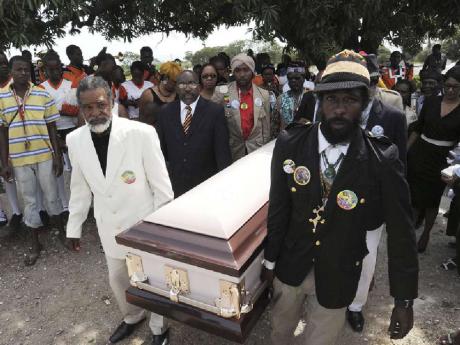 Pall-bearers make the last walk with Lloyd Brevett, one of the founding members of the Skatalites. - Photos by Norman Grindley/Chief Photographer 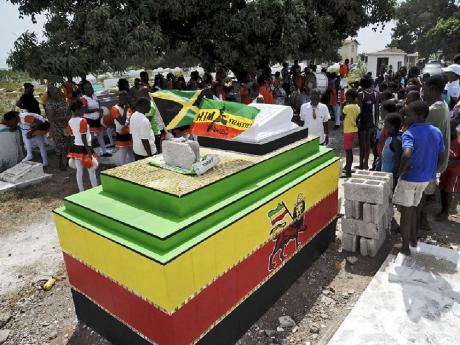 People watch proceedings as Lloyd Brevett, founding member of the Skatalites, is laid to rest yesterday at the May Pen Cemetery in Kingston.
1
2

The funeral of Skatalite member Lloyd George Brevett was a small, intimate affair at the University of the West Indies Mona Chapel yesterday.

His widow, Ruth Brevett, found it difficult to hold it together and broke down on numerous occasions. The great man was gone.

Lloyd Brevett was born on August 1, 1931, celebrated as Emancipation Day, and he later developed into an accomplished musician, credited for building the double bass (some call it a walking bass line) and the jazz drums for performing bands.

Brevett was also a founding member of one of Jamaica's most important musicians groups, the Skatalites.

The Skatalites contributed to the development of ska, rocksteady and reggae as both composers and performers, working with legendary producers such as Sir Clement 'Coxson' Dodd, Duke Reid and Prince Buster.

At the ceremony, Opposition Spokesperson on Youth and Culture Olivia 'Babsy' Grange described Brevett as a pioneer.

"He and his group paved the way for reggae music in a way that has transcended all barriers, creed and races," Grange said.

She also expressed sadness that Brevett's son, Okeene Brevett, was killed after accepting an award on behalf of his father just a month before his father's death. She offered the family her condolences, and warned the public to cherish icons while they were alive.

Grange also expressed disappointment that the Church was not filled with persons from the music industry and the media.

"Don't scatter roses after we are gone," she said.

Grange also said she wanted to see an expansion of the Jamaica Museum as well as the creation of a memorial park to keep the legacy of icons alive.

"Every time we lose an icon, we lose a part of us. As an industry of which I am a part, I want to say get our house in order," she said.

Lisa Hanna, minister of youth and culture, also shared the view that a facility needed to be created to document and display the great contributors to cultural development.

She said Brevett's death was a big loss to the music industry.

"He really has contributed to the fabric and the foundation of certainly one of our best legacies, which is our music. He is consi-dered a pioneer bassist and we don't have many persons like Mr Brevett anymore," Hanna said.

"He was an icon and we hope that more people will get involved and learn the culture and history of our music, get involved in understanding the foundation that has been laid for them.

"Many of their families are still suffering because of hardships which they went through because of the nature of the industry at the time. Many of them were taken advantage of and the young people must understand, appreciate and get involved with the work that was done by these men who gave great contributions to the world and our culture," Hanna said.

Veteran musician and member of the Jamaica Recording Industry Association Michael 'Ibo' Cooper, also shared his view on the work of the late Skatalite. According to Cooper, Lloyd Brevett was a mentor.

"I used to watch the Skatalites on JBC and emulate them, they were like my teachers. I was not in a classroom with them but they were my classroom and partially responsible for my direction into music. They created the bass drum and millions of dollars have been made based on their creativity," he said.

The iconic Lloyd Brevett, OD, was laid to rest at the May Pen Cemetery yesterday evening.